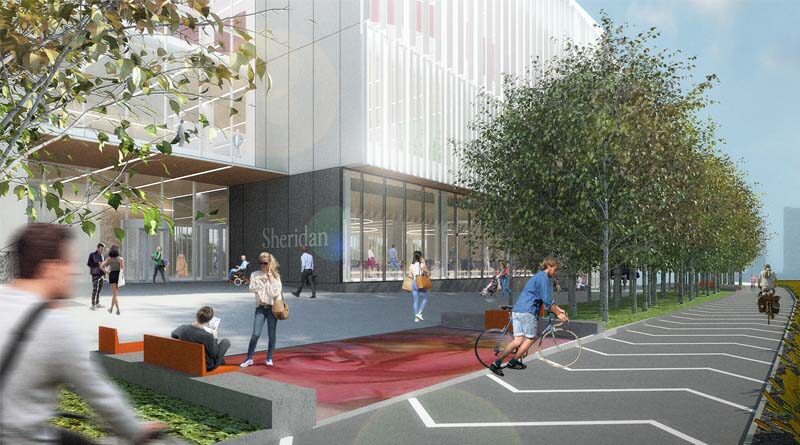 MISSISSAUGA, Canada—The Hazel McCallion Campus of Sheridan College will be expanding to include a new center of activity for students. The Sheridan College Hazel McCallion Campus Student Life and Athletics Hub is being jointly designed by Montgomery Sisam Architects in conjunction with Moriyama & Teshima Architects, both of whom are located in Toronto.

The 70,000-square-foot complex will entail recreational and food service areas as well as places for students to sit and interact. Among its amenities will be a multilevel “floating” running track that runs the interior perimeter of the building and is visible both from the inside and outside. There will also be spaces for students to lounge, game areas and a modern fitness facility. All of those spaces will be connected via a double-height atrium.

In addition, a glass-clad exterior will permit more natural light to permeate the interior of the building, as well as allow for students to have better views of the outside while dining or engaging in physical activity.

In a statement sent to SCN, Daniel Ling, principal at Montgomery Sisam Architects, said that the design goal, developed in concert with Moriyama & Teshima Architects, was to make the new structure flow into the overarching architectural motif already present at the Hazel McCallion Campus.

“The new campus hub we’ve designed provides a space for students to experience campus life beyond the borders of the classroom,” Ling said. “It’s a destination for health and wellness, a place to socialize, a place to spend quiet study time, or to engage in boisterous play. That’s why it was so important for us to work collaboratively with the Student Union on the building’s programming, as we wanted to create spaces that students would gravitate to.”

Ling said that the building’s exterior was purposely designed to respond to “solar orientation,” meaning that as much natural light as possible would be allowed inside, and thus foster unique interplays between light and shadow throughout the days—and changing with the seasons.

Furthermore, the visitor experience of the new building changes depending on where he or she traverses within the building itself. Accordingly, the views of the interior shift as you transition from the floor level and on up to the elevated running track and rooftop terrace, providing what Ling described as an “interesting narrative of the surrounding city context thanks to an abundance of windows.”

“The natural lighting and transparency of the building also helps to create a greater sense of connection,” Ling said. “In addition, because this is a commuter campus, we set out to design a place that would make students want to spend more time on campus.

“We are proud to have been able to create a new hub that contributes to an added sense of community on campus.”