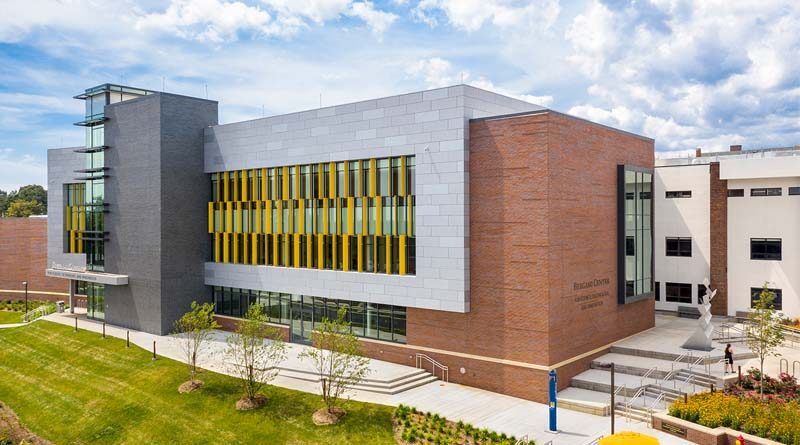 The 45,500-square-foot, three-story structure is designed with a central atrium at its center. Photo Credit: © Peter Aaron/OTTO, courtesy Svigals + Partners

WEST HAVEN, Conn.—A new science and technology building that has gone up at a New England college has been recognized for the innovation of its design and construction, which has earned it a LEED Gold Certified green building certification.

The recently completed Bergami Center for Science, Technology & Innovation was designed by Svigals + Partners, based out of nearby New Haven.  The 45,500-square-foot, three-story structure is designed with a central atrium at its center, thereby allowing it to function as a locus for social activity and encouraging interactions between students and faculty.  The building was named in honor of alumnus Samuel S. Bergami Jr. and his wife, Lois, longtime benefactors to the school.

To make the Bergami Center blend more seamlessly into the existing campus’s motif, the new building connects directly to the existing Buckman Hall, which is part of the school’s engineering school.  Portions of Buckman were renovated to allow the two buildings to perhaps appear as if they had always been joined at the very heart of the University of New Haven.

The Bergami Center is only the most recent collaboration between the college and Svigals + Partners after the designers previously envisioned the Engineering and Science University Magnet School (ESUMS), which sits adjacent to the main campus.

Julia McFadden, associate principal with Svigals + Partners, said that the Bergami Center was envisioned to “stimulate the kind of productive, collaborative interaction currently leading to breakthrough thinking in institutional, corporate and scientific settings.”  Accordingly, her firm’s plans entailed spaces where students can congregate to more easily swap ideas.  Furthermore, Svigals + Partners’ “thematic” elements are meant to echo the notion of starting out with ideas that eventually evolve into hypotheses and experiments.

And as the new facility indeed has the word “technology” in its name, it will be rife with 3D printers, a broadcast studio as well as a state-of-the-art auditorium that can double as a cinema when so needed.

Bergami Center represents the crown jewel in the university’s Charger Challenge, a slate of improvements and various other campus projects designed to coincide with the school’s centennial in 2020.

“At its core, the Bergami Center embodies our university-wide commitment to fostering innovation, cultivating creativity and ingenuity, and educating the next generation of problem solvers,” University of New Haven President Steven H. Kaplan said in a recent statement.  “In creating this space, we have strengthened our commitment to preparing our students to excel in the careers of the future.”

“The university’s leaders understand that their students need to be prepared for life after college,” added McFadden. “Bergami Center combines advanced technology with the collaborative modes that produce transformative thinking, offering students a place to acquire both the skills and the competitive edge they will need.”