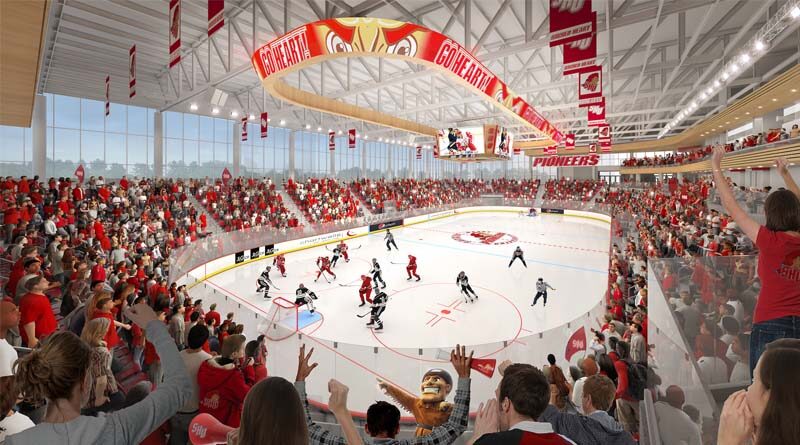 A hockey rink built to NHL specifications is just one element of the $70M venue that will sprawl across more than 122,000 square feet. Photo Credit: JLG Architects and The SLAM Collaborative

The 122,158-square-foot building will have “technologically enhanced” locker room amenities, fitness and training areas, as well as sports medicine and hydrotherapy suites. Additionally, as the facility will be geared toward training student athletes to be competitive for the NHL, the building will also have a rapid-shot puck room and facilities for videotaping practice. The arena itself is built to NHL specifications of 85 feet by 200 feet.

The hockey rink is a joint collaboration between JLG Architects, the SLAM Collaborative, Dimensional Innovations and Consigli Construction.

At the groundbreaking, SHU President John J. Petillo said that the new arena will be home to the university’s Division I men’s and women’s hockey teams as well as the school’s figure skating athletes.

“It is the continuation of a multi-year expansion program to support student growth, engagement and personal development,” Petillo said. “This facility will serve our student-athletes both on and off the ice.”

The president also thanked Frank and Marisa Martire, who donated $5 million to the construction cost, and in whose honor the building will be named. Frank Martire, a 1969 alum of Sacred Heart, currently serves as chair of Sacred Heart’s board of trustees, and also holds an interest in the NHL’s Vegas Golden Knights franchise. Previously, the Martires also supported the Frank & Marisa Martire Center for the Liberal Arts and Chapel of the Holy Spirit, both parts of the Sacred Heart campus.

“They give of their time, their talent and their philanthropy, which is extremely valuable to us,” Petillo said of the couple.

The first games at the new arena are scheduled to be played in January 2023. In addition to sporting events, the Martire arena will play host to various learning laboratories for SHU students studying hospitality, sports communication and management, media and marketing. Guest lectures, concerts and other activities will take place there as well.

“This arena will be a Division I intercollegiate skating cornerstone and one of the best in the Northeast,” Jim Barquinero, senior vice president of enrollment & athletics, said in a statement. In fact, it was Barquinero who founded the school’s hockey and figure skating programs in the 1990s. “In addition to providing a sophisticated and beautiful home venue for our teams, it will serve our entire university community and residents throughout the region,” he said.

“This is a historic day, not only for the university, but for our hockey programs,” added C.J. Marottolo, head coach of the men’s ice hockey team. “This arena has NHL amenities with a collegial feel. Our teams and students will have a place to call home, and that really fills my heart.”

“I’m so thrilled about having a rink on campus,” Lisa Fedick, head coach of the figure skating club, said of the project. “The university has tremendous commitment to figure skating and all ice sports. We’re looking forward to taking our program to premier status.”

Sacred Heart is the second-largest Catholic university in New England.