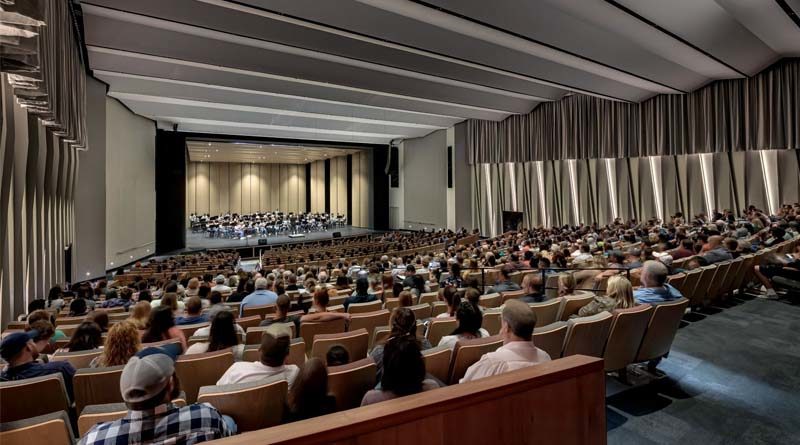 The addition of a 1,000-seat theater was a huge focus of the expansion project at Melissa High School. Photo Credit: Charles Davis Smith

DALLAS—Melissa High School in Texas has wrapped a substantial renovation and expansion that includes a stellar new performing arts complex.

Architectural firm Perkins&Will was chosen by the Melissa Independent School District, which is located in Dallas’s far northeastern suburbs, to design the expansion of the high school’s campus and add to its amenities with a new arts facility. Perkins&Will’s Dallas-based design studio’s mission was to update the cultural and fine arts programs offered at the school, including designing a new theater complex that would fit in with the college’s overall design.

The goal of the design was to meld the new building’s design seamlessly so that it maintains the previous aesthetic of the existing buildings. Accordingly, the auditorium building features an elevated portico that melds with a “garden zone” populated by native plants. The garden zone meets with the main lobby entrance while also allowing for overflow should events require additional outdoor seating for lectures and performances taking place at the lobby level.

As a person approaches the auditorium building, he or she ambles along a promenade, and the eye is naturally drawn upwards to behold design elements. A “relief and shadow” motif is established by the brick-laying pattern, which is meant to make the building itself feel more approachable.

As the visitor enters the lobby, the metal-slatted ceiling appears to emanate from the exterior canopies that Perkins&Will has fashioned. Glazing along the eastern wall provides a welcoming aesthetic element, and serves to draw students, staff and visitors alike into the educational setting.

Other lobby design elements include faceted gypsum planes meant to mimic the naturally flowing fabric of a stage curtain. Stairwells of the performance space are dressed in white oak wood harvested from nearby in northern Texas. The performance hall also features textured walls whose elements are exaggerated such that they refract sound within the space for optimal enjoyment.

The general contractor for the project was Crossland Construction, whose office near the jobsite is in Prospect, Texas.

In a statement to School Construction News, Vandana Nayak, principal at Perkins&Will Dallas, said that the brick and glass exterior elements give the building “a stately presence.”

“Melissa ISD sought to create a state-of-the-art fine arts center that accommodates practice and performance, and allows the district to host UIL (University Interscholastic League) competitions for various programs,” Nayak said. “We designed an acoustically flexible, multipurpose facility that supports visual arts, theatre, band, and choir programs. We created a stunning visual effect through sculpted walls that wrap the interiors of the performance hall with an abstract expression inspired by the folds of the fabric on stage.”