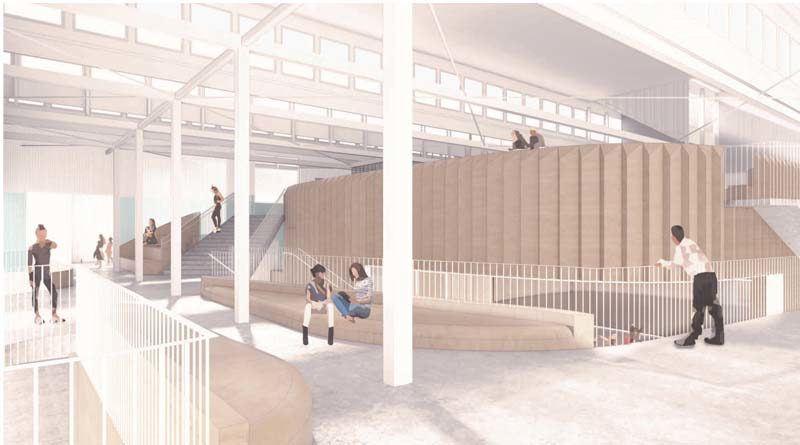 Elements of the historic building that will be preserved include its clerestory windows. The redesigned interior, modeled by Lorcan O’Herlihy Architects (LOHA) of nearby Los Angeles, is meant to allow ample natural light to enter the building from those upper windows. Furthermore, clear walls will allow for people to observe classes in progress.

Woods from the existing Villa Park Orchards building are being recycled for use as new walls, stairs and other internal building elements. Reclaimed wood from the older building will also stand alongside cork wall, acoustical paneling, concrete and exposed finishes.

The Sandi Simon Center for Dance will offer six dance studios, including one that can be effectively sealed off for more intimate performances. Furthermore, moveable glass walls will allow the dance spaces to be opened out or closed off to facilitate various crowd sizes. One of the studios will be devoted specifically to tap dancing, and the other five will be multi-use.

Other new rooms to be built include a physical therapy and first aid room, kitchens, administrative offices, a “tap-flex” studio for practice and warmups, as well as a flexible mezzanine that can be used for classes, meetings or as a student lounge.

Theatrical elements such as new lighting and sound equipment are being installed to offer professional-level performance capabilities. In addition, state-of-the-art video equipment will be placed so that performances can be both filmed and broadcast off-site. There will be space for live musicians to perform.

“The specialized nature of this project—being both a dance facility and historic retrofit—led Chapman University to opt for a design-build-assist delivery method,” Bill Wilhelm, president at R.D. Olson Construction, said in a recent statement. “With this approach, R.D. Olson Construction has been highly involved in the design, working in partnership with architecture firm LOHA to make the building structurally sound and incorporate the unique aspects of the historic space into the new dance center.”

Phase I entails retrofitting the 70,000 square-foot Villa Park Orchards building so that 39,000 square feet alone will be utilized by Chapman’s dance department. The second phase, building the actual dance studio, aims to finish by June 2022.

Founded by Bob Olson in 1979 and led by President Bill Wilhelm, R.D. Olson Construction commemorates 43 years of building and is one of the top 40 general contracting firms in California. R.D. Olson Construction is a premier builder of hotel and multi-unit properties for several national hoteliers and developers, including Marriott, Hilton, Hyatt, Ritz Carlton, MBK Living, Related Properties and Meta Housing, and has a robust portfolio of renovation projects including Atria Senior Housing, Chapman University’s Reeves Hall, the conversion of the historic Bank of Italy Building into the Nomad Hotel and more. The firm also has a rich history as a builder of office, retail, restaurant, education, senior living and recreational projects. Learn more at www.rdolson.com.