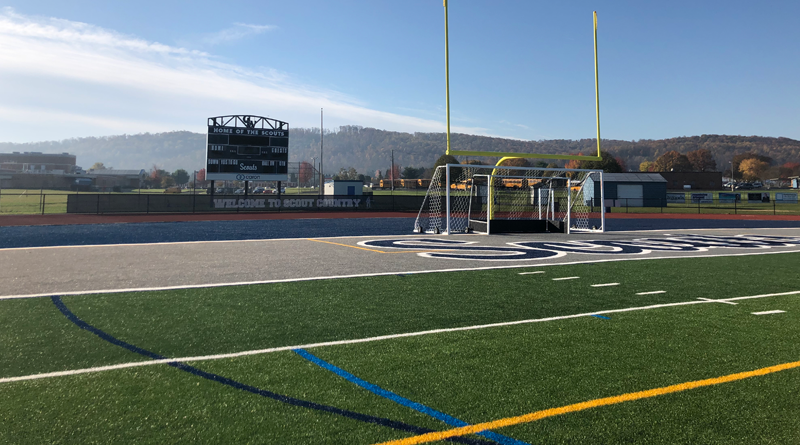 ROBESONIA, Pa.—Conrad Weiser High School, located in Berks County—about an hour from Philadelphia—has updated its athletic field so that it will be weather-resistant, as well as up to specifications meant to reduce injuries for student athletes.

The Conrad Weiser Area School District athletic field had previously been all grass, and because of that, it was a frequent victim of floods that damaged the playing field and made it less of a field and more of a rather filthy puddle. The field had for years been host to school and intramural contests in football, boys and girls soccer, field hockey, as well as boys and girls lacrosse.

Architecture firm Muhlenberg Greene Architects of Wyomissing, Pa., was tasked by the Conrad Weiser Area School District to give the athletic field not only a facelift but also ensure that it was less prone to future water damage. Muhlenberg Greene applied the district’s plans briskly so that the field would experience as little interruption to its athletics as possible.

The district’s Phase 1 Master Plan entailed installing “A-turf” on the field itself, which would be less prone to water saturation. The renovation plans included demolishing the “natural” turf that had long been present on the athletic field and then working below the field level to install a sub-base and drainage system to avoid repeats of the types of flooding that had previously deluged the field and drenched the grass. The new artificial turf was laid on top of the sub-base so that it would be better reinforced as a playing surface.

Other work included upgrading the athletic field’s lighting systems and applying all-weather track protection so that the athletic field could be utilized year-round, not merely during the warmer months. New drainage works had to be excavated, and stormwater controls also installed at the site. Shock pads had to be put into place as well, as did concrete curbing and stone bases.

“These grass fields are used pretty heavily by the school districts, as well as the surrounding community, and the grass never really has time to grow back before another sport starts using it, resulting in sometimes less than suitable conditions,” said James A. Sarro, principal of Muhlenberg Greene Architects. “By replacing the existing grass field with turf we were able to provide a surface that is consistent, safe, and can be used by multiple sports during any given season without fear of degradation of the surface.”

Adding their input, personnel at general contractor Schlouch Inc. said that they have been involved in laying down both turf and track for over two decades.

“Schools have the ability to practice and compete with six teams on the same field while maintaining consistent playing conditions,” the contractor said in a statement. “Over the past 20 years we have seen the artificial turf industry make various improvements to the product itself and adding pads under the turf for increased safety.”