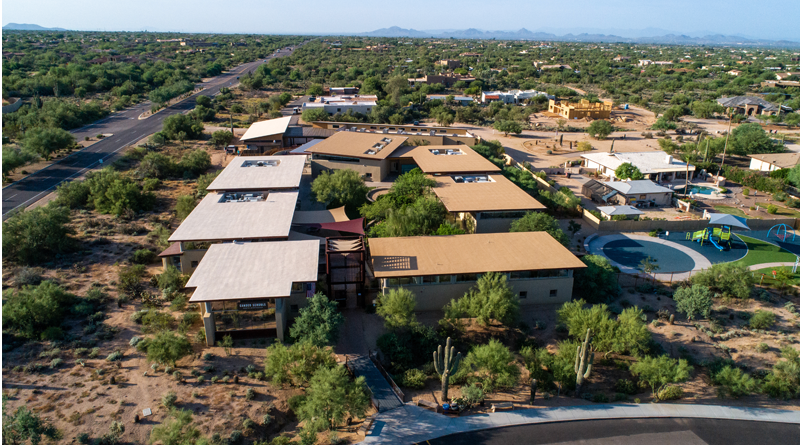 The renovation and expansion of Candeo North Scottsdale, located at 7191 Ashler Hills Dr., entailed a two-phased approach necessary to both add new educational space as well as update older classrooms and facilities on the campus. Adolfson & Peterson built two new buildings entirely from scratch, as well as renovated existing buildings. The general contractor also gave some nip-tuck treatment to recreation areas and various other outdoor spaces used by students, visitors and staff.

The first phase of work at Candeo North encompassed extensive updating to the school’s administrative building. Adolfson & Peterson had to renovate the building’s concrete floors, which needed to be sealed and painted to make them as moisture-proof as possible. Other Phase I work entailed upgrading the school’s courtyard and expanding its playground, as well as landscaping the parking lot.

Phase II labors entailed the two new buildings themselves. One was a 7,902-square-foot edifice that will be home to a half-dozen classrooms, lockers, break rooms and storage areas. The second building, encompassing 2,470 square feet, contains three up-to-date classrooms, a mechanical room, electrical closet and “fire riser” room. On the exterior, Adolfson & Peterson also fashioned a covered courtyard as part and parcel of the second phase.

SPS+ Architects, based in Scottsdale, designed the school’s renovations and new buildings.

The sizzling summer sun caused several delays, likely for worker safety. Furthermore, the ongoing pandemic required extra cautions to ensure the safety at the jobsite for workers. However, Adolfson & Peterson was still able to bring in the project months ahead of deadline.

Scott Salyer, vice president of operations for Adolfson & Peterson, said that his firm has worked with Candeo Schools on various other projects throughout the years, and thus there was a common aim to surmount such obstacles.

“When the pandemic hit, we collaborated closely with Candeo Schools, SPS+ Architects and local subcontractors to problem-solve many of the issues that other projects were experiencing,” Salyer said. “We’re pleased with the outcome and confident the school’s additions and renovations leave it fully equipped to effectively educate and accommodate students in one of the fastest-growing suburbs of Phoenix.”

“Our work with Adolfson & Peterson has been a smooth and impressive experience,” added Dr. Stephanie Musser, founder and CEO of Candeo Schools. “The care and responsiveness they have shown in meeting our school’s goals has been readily apparent from the start. The result is a customized, beautiful campus tailored to the needs of our community and our education program.”

Adolfson & Peterson has operated in the Phoenix area for decades. Their other local school construction projects include the Academies of Math and Science, BASIS Charter Schools throughout the Valley, Williams Field High School and the Maricopa Institute of Technology.