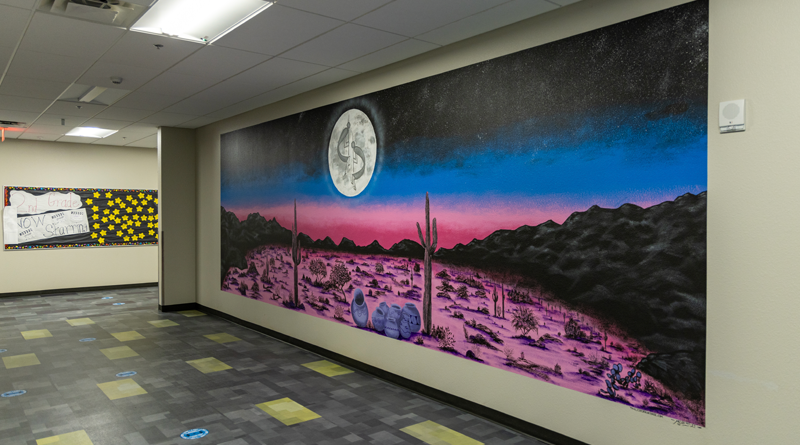 The new school is graced with ample artwork, including this mural of the evening desert sky. Photo Credit: Rosendin

TEMPE, Ariz.—Construction firm Gilbane and its team have worked fruitfully with Arizona’s Gila River Indian Community on a new educational building, called the Blackwater Community School. The two-story structure will have the capability to serve students from preschool and on through 5th grade. The school will also host the local Family and Child Education Program (F.A.C.E.).

Gilbane’s partners on the job included electrical engineer Rosendin, based in San Jose, as well as architectural designer Breckenridge Group.

The $25 million project’s aim was to replace an older school that existed on the same 7.43-acre campus before but had fallen into disrepair. The new facility entails educational space as well as a cafeteria, multipurpose area and media center. Throughout the new campus, the contractors and architects worked with tribal leaders to hang artwork important to the two tribes serviced by the school, the Akimel O’Otham, descended from the Hohokam people, and the Pee Posh, of Yuma ancestry. Accordingly, all the artwork at the school was approved by the Blackwater Community School Board.

Historically, the Hohokam were known for their technological virtuosity when it came to irrigating crops in the extremely arid Southwest. Accordingly, artwork on the campus showcases scenes of the Hohokam engaging in agricultural activities. Furthermore, a shade structure constructed of metal was fashioned to resemble cactus ribs, a material the Akimel O’Otham used.

“The Blackwater Community School is the heart of the community and celebrates the Gila River Indian Community’s heritage throughout the year,” Jagdish (Jack) Sharma, principal of Blackwater Community School, said in a recent statement. “Our educators take pride in our quality educational practices and the presence of traditions. This is the reason why traditional symbols of the culture are placed throughout the new campus.”

Sharma added that one of the school’s murals shows the nighttime desert, and the name “Blackwater” itself comes from how the desert’s standing water looks darkly in the evening. “There are murals like this all over campus that reflect our students’ culture enriching their overall learning experience,” Sharma said.

Parts of the construction had to be completed while students were still in session at the older buildings. Accordingly, scheduling had to be juggled so that the largest parts of the buildout took place over breaks when students weren’t at school.

“Blackwater Community School will serve as a pivotal gathering and educational spot for children and adults on the Gila River Indian Community,” Jeff Keck, senior project executive of Gilbane Building Company, said in a recent statement about his firm’s work. “Gilbane is proud to work with Rosendin and other trade partners to have safely built a new campus to support this community’s families, cultures and traditions.”

Added Ben Miller, Rosendin’s division manager: “Rosendin is proud to have built the new elementary school in the Gila River Indian Community to give students the very best environment to learn and grow. The school will serve as the hub of the larger community and support family education and culture in the local area.”