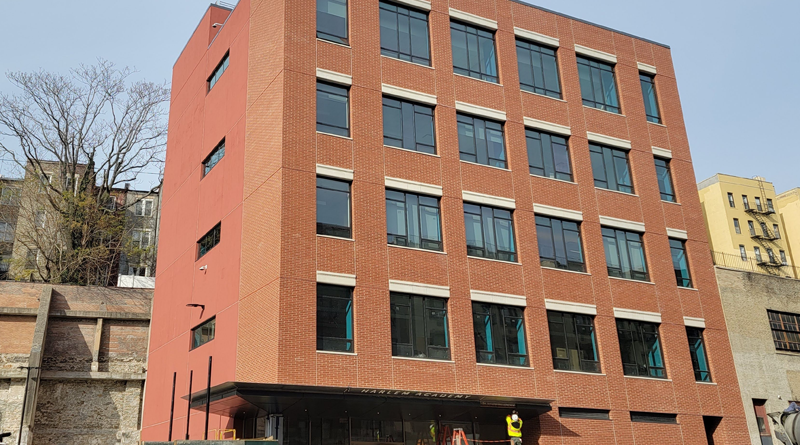 NEW YORK—After nearly two decades of seeking a full-time campus, the Harlem Academy has now officially opened the doors of its new home, located at 655 St. Nicholas Avenue in the Hamilton Heights neighborhood of Harlem. This was after the school had for years operated out of three rented storefronts, none of which were near one another.

Students started moving into the new educational facility in December, with 2022 the year the academy can stop occupying various temporary quarters around the city. The new school building entails a five-story, 29,000-square-foot facility designed by architecture firm Perkins Eastman and built by general contractor E.W. Howell.

Perkins Eastman’s design for the new academy features an extensive library facility, which the academy’s team imagines as the centerpiece of the entire school. The library will also feature flexible classrooms with ample windows to allow in as much light as possible. Furthermore, the building will have a cafeteria serving meals throughout the day, an entry commons, as well as dedicated outdoor spaces that will function for both sports and educational opportunities.

The site was chosen nearly a decade ago, partly due to its proximity to various Harlem neighborhoods and Washington Heights. The Bronx is a quick subway ride away, as are Columbia University and City College.

Harlem Academy bought the half-acre lot in Hamilton Heights following a successful fundraising campaign that brought in over $32 million to cover construction and engineering costs. The school broke ground in the summer of 2020 and required nearly a year and a half to see it to completion.

Harlem Academy, which was founded in 2004, is a private school for students from kindergarten to 8th grade. It is the only school on the island of Manhattan that specifically focuses on extending educational opportunities to students from underprivileged communities. Their graduates have gone on to study at several Ivy League schools.

“Our new permanent campus is a vibrant space that provides a learning atmosphere designed to inspire, challenge, and support our students,” Harlem Academy founder and head of school Vinny Dotoli said in a recent statement. “The move to the new building launches the next stage in our school’s evolution, allowing us to nearly double our student population and create even more robust programs. Most critically, it ensures a lasting pathway to opportunity for generations of students to come.”

Designer Perkins Eastman has also worked on renovations at New York University and another school in Manhattan called Avenues: The World School. General contractor E.W. Howell’s other Gotham-related educational projects include the Village Community School, the new PS 464 and PS / IS 419.