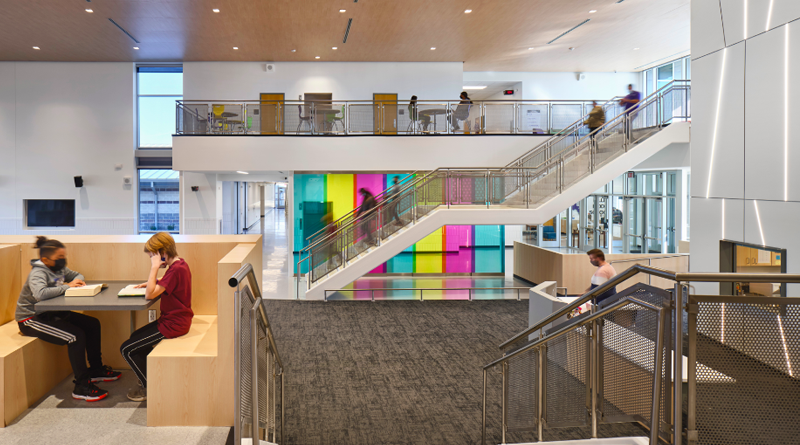 Perkins&Will was charged with renovating nearly 40,000 square feet of the older school’s space, while at the same time adding 37,000 square feet of new space to the Miller Middle School so that it can meet its goals of educating students in both sciences and the arts.

Miller Middle School’s renovations and addition were both designed by Perkins&Will’s Austin office to be an efficient educational space that allows students to be engaged in their learning, while at the same time promoting inclusiveness across the district. The design also features elements meant to foster interaction, such as outdoor spaces that can be utilized as additional educational space during the Lone Star Star’s rather lengthy warm season.

Additionally, the library features a glass-enclosed prism that can also be seen from the outside. As per the design plans, this great prism represents a fusion of the school’s goals for expanding their study body’s exposure to arts and science simultaneously—with students being able to not only appreciate its beauty but also its mathematical and geometrical properties. Furthermore, the library is meant to act as a central hub for the school, such that students and faculty utilize it as the “center” of their learning environment—and from there head out to various classrooms, performing arts spaces and laboratories.

As students make their way out of the central library area, they are guided to their various classrooms thanks to colorful accents in cyan, magenta and yellow. The colors correspond to specific grade levels and thus help students to find their way around, especially as they learn to navigate this new space.

Perkins&Will worked at Miller Middle School with general contractor Webber Commercial, LLC, which is based out of The Woodlands, Texas. Construction commenced in November 2019. Most of the work at the site was completed last fall, but the contracting work continued up until March of this year.

“Placing the addition in front of the existing building created an opportunity to modulate the first impression and create a new architectural expression without impacting the circulation of the site,” Lynn Petermann, senior project architect and senior associate at Perkins&Will, said in a statement emailed to School Construction News. “The addition emphasizes the library becoming the central hub, creating a seamless flow of space to the surrounding classrooms, labs, and performing arts space accessible from the library’s upper level.