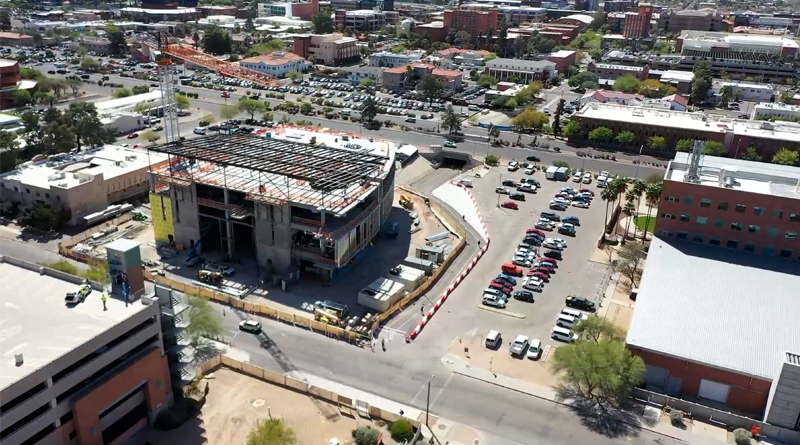 When finished, the ARB will be home to instruction and research related to space exploration, imaging technology, manufacturing and other scientific inquiry. Photo Credit: McCarthy Building Companies

The $85-million, four-story complex is being constructed at the southeast corner of Helen Street and the Highland Corridor, a major campus throughway.  When finished the ARB will be home to instruction and research related to space exploration, imaging technology, manufacturing and other scientific inquiry.  The ARB will also be home to the academic world’s single largest thermal vacuum chamber.  The building will feature laboratories, offices, conference rooms and “high-bay payload assembly areas.”

McCarthy has been working in conjunction with designer SmithGroup to ensure that the ARB will provide the state-of-the-art capabilities for which the University of Arizona has become known within the scientific community.  Various academic disciplines and concentrations will all be warehoused in the new building, including artificial intelligence, disease prevention and space exploration.

The ARB will also be the new home for the school’s Imaging Technology Laboratory, currently off-campus.  The lab will be able to expand its footprint at the ARB as it continues its missions related to satellite imaging and improving the U of A’s telescope capabilities.  The ARB will also be able to reach the next step in designing and testing nanosatellites, which not only reduce the cost of space exploration but take away the need for human astronauts.

No actual classes will be taught at the ARB, but both graduate and undergraduate students will be able to conduct research and experiments inside the facility.

“As a design-build project, our team fully integrated with our design partners, the owner and its end users to ensure ARB is not only highly functional, but we’ve also been able to overcome many of the supply chain issues that other projects are facing—the result is that ARB is on schedule and on budget even as modifications were made throughout construction,” Mike Lee, McCarthy’s ARB project director, said in a recent statement.  “Additionally, design-build delivery provided the visibility and flexibility necessary to accommodate and install the massive, irreplaceable, thermal TV chamber and support the University’s research and educational objectives.”

“This building will bring together people from multiple disciplines, multiple departments, and multiple external community partners as a collective to approach research as a collaborative process where the facility enables the whole, rather than the siloed parts, of addressing great societal challenges, regardless of how complex, but also glorious, that whole may be,” R. Brooks Jeffery, the University of Arizona’s associate vice president for research infrastructure, said during the topping-out event.

Added Stephanie Mitrovic, SmithGroup’s Science & Technology Studio Leader in Phoenix and principal in charge of the project: “The Applied Research Building (ARB) will serve as a state-of-the-art core research facility that supports next-generation space research. The team designed the building’s unique curtain wall assemblies to combine glass, metal panels with protruding fin walls, and masonry veneer to tie in the colors and design elements of the surrounding facilities.”

The builders are aiming for LEED Silver certification.  Construction is expected to be finished by next January.

McCarthy and SmithGroup have worked on other projects for the University of Arizona including the College of Medicine – Phoenix, the Arizona State Museum collections storage, and the South Stadium Parking Structure.