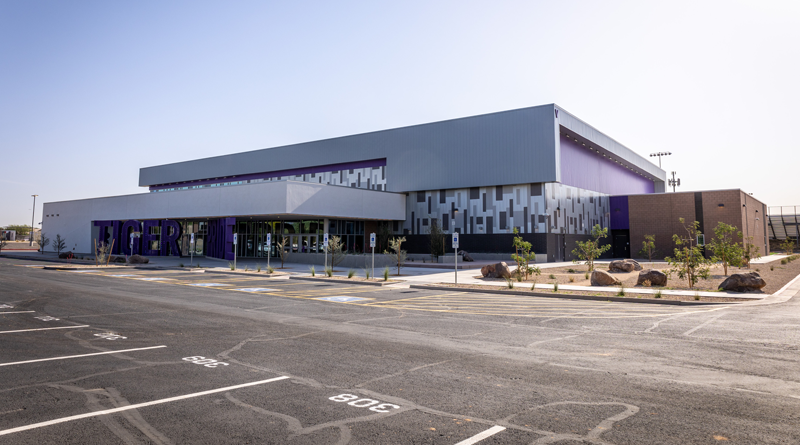 The $16.25-million edifice, known around campus as the “Rise and Roar Center,” encompasses 45,000 square feet of multipurpose athletic space. The Rise and Roar Center entails three full athletic courts with fixed seating, with additional retractable seating that can be added if necessary. Total seating capacity for the courts is nearly 2,500. A tunnel leads from the locker rooms to the court, allowing for both dramatic entrances and quick retreat to the showers afterwards.

The new athletic complex was constructed atop what had been the freshman softball field, which was relocated to another place on Millennium’s campus. McCarthy and BWS also worked jointly to alter the school’s previous gymnasium into a building that now hosts classrooms, a dance studio, and band and choir rooms.

In a recent statement about the project, Tyler Shupe, project director for McCarthy’s Education Services Group, said that the relationship with both the high school and the architects at BWS allowed for a smooth and on-time delivery of the Rise and Roar Center.

“The remodel demolition and insulation project scopes were self-performed by the McCarthy team due to the market’s current trade labor challenges,” Shupe said, adding that this “provided the project cost savings and shored up potential industry setbacks.”

“We are excited to have a state-of-the-art facility that allows the entire school to gather all our students together for school functions and pep assemblies,” added Millennium Principal Todd Stevens. “This new space offers a central location to celebrate academic accomplishments, a beautiful venue to showcase our choir, band and artists, a facility where our athletes can practice, and a classroom for our physical education classes.”

“The Center will be a point of pride and a special place for our students and the greater community,” said Principal Stevens, adding that when not in use for student athletics, the Rise and Roar Center will be rentable to summer camp activities, art shows and various other functions. “The options are endless,” he said.