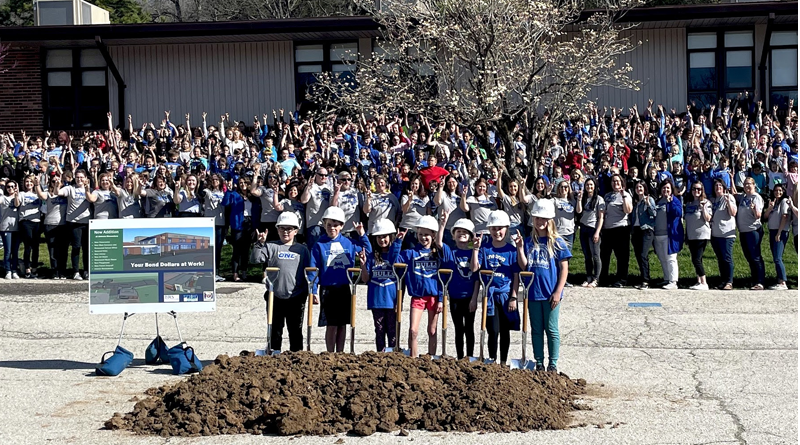 Students and staff at Antonia Elementary were revved up for the start of the expansion project that will add more than 20,000 square feet of new space. Photo Credit: S.M. Wilson & Co.

At nearby Meramec Heights Elementary, the redesign plans call for a modern cafeteria and kitchen as well as expansions to the arts and music rooms. S. M. Wilson will be constructing an entirely new entrance for the school as well as resurfacing both the playground and the parking lot. Modern classrooms, a gym and offices are also on the docket for the nearly 4,000 square feet of space to be renovated at Meramec Heights.

Recent groundbreakings were held at both schools, and were attended by educational staff, school board members, parents, students, and other members of the community. All of the work must be completed while classes remain in session at both schools, so S. M. Wilson will take campus safety and minimizing class disruptions into account during their buildout.

An important aspect of work to be undertaken at both Antonia and Meramec Heights schools is adding new storm shelters in the tornado-prone Midwest.

“The construction of storm shelters within these additions is extremely challenging as the site conditions are very constricted by existing occupied buildings and factors such as limited areas for staging,” Mark Cochran, S.M. Wilson’s COO, said in a statement emailed to School Construction News. He added that the storm shelters won’t stand out obtrusively and “are designed to integrate well into the existing architectural features.”

Additionally, both campuses will see an update to their security features, including keycard access for exterior door entry as well as security cameras being installed around the campuses.

The renovations and upgrades at both schools are coming from a $40 million bond passed by voters as part of the Promise, Purpose and Progress initiative—or Prop P—which was approved in June 2020 in order to make safety updates and better the accessibility of buildings throughout the Fox C-6 School District, which entails approximately 12,000 students in Jefferson County.

“The most rewarding part of this project will be knowing that we constructed a new building addition with storm shelters that provide a safe place for all the kids during inclement weather while also improving their learning environment,” said Cochran. “This is a win-win for all of us.”