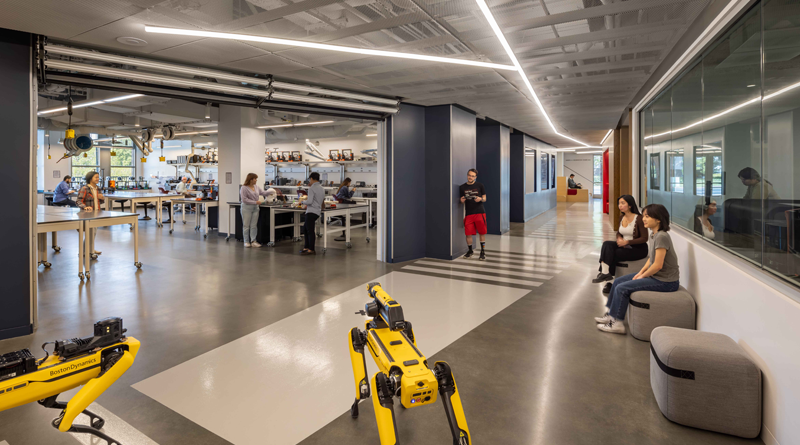 The Swenson Family Hall of Engineering includes a robotics lab, collaborative spaces, and a dean’s suite, among other spaces. Photo Credit: Lawrence Anderson

ORANGE, Calif.—C.W. Driver Companies has completed work on the three-story Swenson Family Hall of Engineering at Chapman University, located in Orange.  The building is named after engineer Jim Swenson and his Swenson Family Foundation, which donated $5 million to Chapman University, and Swenson Hall will house Chapman’s Dale E. and Sarah Ann Fowler School of Engineering.

Work at the site entailed a 31,000-square-foot buildout of interior space within the extant 49,697-square-foot Keck Center for Science and Engineering, which was constructed by C.W. Driver in 2018 as the permanent home for the Schmid College of Science and Technology and Fowler School of Engineering.  Swenson Hall increases Chapman’s focus on the STEM fields—and is meant to foster a sense of interdisciplinary collaboration, as students at Swenson Hall will work together on problems facing not just Southern California specifically but the globe more generally.

Over its trio of levels, the Swenson Family Hall of Engineering entails laboratories for both teaching and research, a robotics lab, collaborative spaces, dean’s suite as well as dedicated faculty space.  The building also features meeting areas and dedicated workspaces.

The design by architecture firm AC Martin Partners, Inc. entails a grand stairwell that connects the uppermost two floors and is thus meant to foster conversation and collaboration outside of the classrooms in an open space.  Meanwhile, the bottommost level is connected via an “ideation path” with other facilities of the Keck Center for Science and Engineering.

“The opening of the Keck Center’s science wing in 2018 signaled a tremendous step forward in the STEM fields at Chapman University,” Collette Creppell, vice president of campus planning and design at Chapman University, said in a recent statement. “Thanks to the valuable expertise of C.W. Driver Companies in building the Swenson Family Hall of Engineering, our new Fowler School of Engineering has a place to call its own.”

Added Aimee Siemianowski, project executive at C.W. Driver Companies: “We were honored to partner with Chapman University in constructing a both beautiful and highly functional hall for its newest academic program, the Fowler School of Engineering.  Our long history of constructing higher education and research facilities for Chapman University and colleges across the state enabled us to deliver a cutting-edge facility designed to foster collaboration, reconfiguration and blur the lines between teaching and education.”

“The facility will be paramount to attracting high-quality faculty and talented students pursuing undergraduate and graduate-level study of engineering, which in turn will help meet the growing demands of the California economy,” said Creppell of Chapman about the new facility.