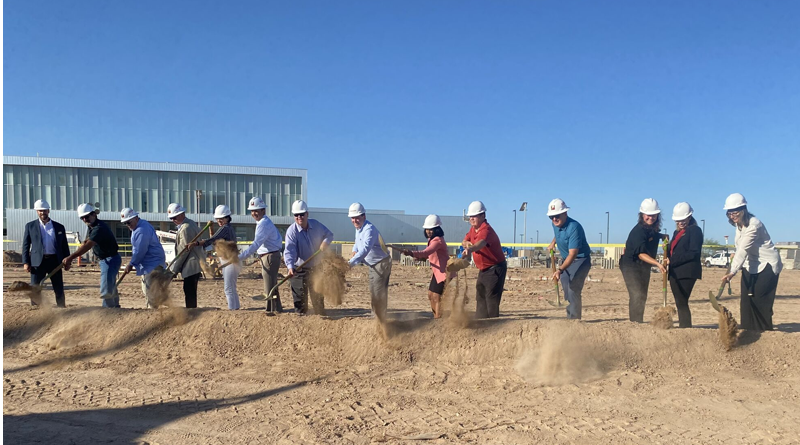 YUMA, Ariz.—McCarthy Building Companies has turned over the ceremonial first shovelfuls of dirt at Arizona Western College’s Student Experience Center, a 45,000-square-foot building that will be home to classrooms, a multimedia center, lecture halls, conference rooms and other education amenities.

The two-story, $17.5 million Student Experience Center will serve more than 11,000 students. Its high-tech multimedia center will house the student radio station KAWC as well as television broadcast operations. Glass partitions will allow for observation of production by both faculty and other students as well as campus visitors. Unique for a modern university, the SEC will feature an esports arena and other gaming areas. The SEC will also have a food pantry and clothing donation program for disadvantaged students that is to be called Andale’s Pantry. Some 13,000 square feet of administrative space will be available on the SEC’s second level.

The construction is being bankrolled thanks to revenue bonds, which won’t raise property taxes in Yuma or in surrounding La Paz County. McCarthy is working with design architect EMC2 to realize the SEC dream. Subcontractors for the work include local firms Haxton Masonry, Delta Diversified Enterprises, Yuma Valley Contractors, Pacific Steel Inc. and Progressive Roofing.

McCarthy’s project manager Jackob Lund said that the SEC will take the campus experience at Arizona Western “to the next level and will afford community members an opportunity to attend special events in the lecture hall.”

In a subsequent statement about the project, McCarthy’s offices said that, unsurprisingly, one of the main difficulties has been hiring enough qualified personnel to work on the school. However, the firm has been ramping up its recruitment efforts—and not just in Arizona—to fill those empty jobs.

“As a result, McCarthy has established a strong presence in Yuma and has a significant number of employees who are Yuma-area residents, many of whom work on this project,” the statement read. The company also said it is fortunate to have many workers throughout the Grand Canyon State that could be transitioned to the work at Arizona Western College.

McCarthy is also battling the ongoing supply chain crisis, which has affected all facets of the construction trade, not only the educational side. The contractor’s statement also took note of the difficulty of working on the SEC while students and staff continually utilize the nearby buildings.

“The team worked with Arizona Western College for an early [guaranteed maximum price] so that all of the underground activities outside of the construction area were completed prior to the commencement of school,” McCarthy’s statement read. “We also established a separation from campus traffic and are working within a secure area while school is in session to ensure the safety of students, faculty and staff.”

Construction of the SEC is projected to be finished by next summer and open for students in the fall 0f 2023.