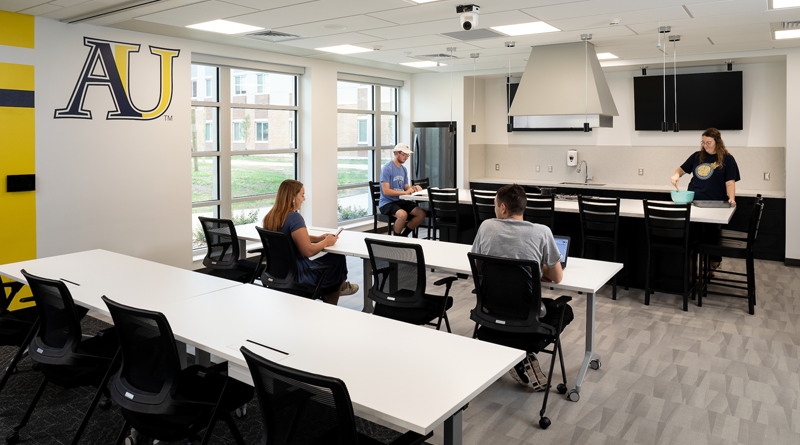 A kitchen space is one area meant to foster collaboration and togetherness. Photo Credit: Jeff Veire of Imagery Photography

SIOUX FALLS, S.D.—South Dakota’s largest city also happens to host the biggest private university in the Mount Rushmore State. And thanks to a new housing unit envisioned by KWK Architects of St. Louis, Augustana University’s students will soon have more space to call home away from home.

KWK and general contractor Mortenson recently completed the buildout of Wagoner Hall, a 54,000-square-foot dormitory. The $16.75-million Wagoner Hall is available for students from any grade, which is in line with the other residences throughout the campus. At Wagoner, freshmen live on the first floor, with upper classmen residing on the two floors above. All told, the dormitory will be home to some 200 students.

As part of KWK’s design, Wagoner is an L-shaped building that offers semi-suites of four beds with one shared bathroom. In addition to living spaces, the area at the front of the residence hall boasts a multi-purpose space that will be usable for students, faculty, visitors and various groups.

The university recently reported that Augustana University Director of Housing Operations Jenna Bump said that the university doesn’t subscribe to the one-size-fits-all model of living on campus. Accordingly, Wagoner offers many different types of studios, apartments and suites for student living.

“Instead of forcing students to be like ‘this is your only option or these are your only two options,’ we’ve kind of opened it up to have all students choose whatever option will work best for them, for their living style, for their price point,” Bump told the campus newspaper the Augustana Mirror.

Part of KWK’s design aesthetic was the promotion of communal activity. According to KWK Principal Paul Wuennenberg, Wagoner’s lounge and kitchen space are meant to foster the creation of an on-campus family.

“The 54,000-square-foot hall is multi-functional for the entire campus community and features flexible classroom space that can be used for programming during the day, then utilized for community interactions in the evenings and weekends,” Wuennenberg said.

In a statement to School Construction News, KWK Principal Javier Esteban mentioned that ongoing supply-chain issues required the designers and contractors to think on their feet during the construction itself.

“The team had to respond quickly to find alternates that not only matched the design intent but could also be delivered on time,” said Esteban. “Working together with Mortenson to find the right suppliers and the right alternates was critical.”

Construction commenced in the summer of 2021 at the southern portion of the university’s north campus.

Wagoner represents just one piece of Augustana’s ongoing expansion efforts, which will later entail an additional 75,000-square-foot residence hall for another 300 students.

KWK was founded in 2013 and focuses on the educational sector, with the goal of enhancing the campus living experience. The firm reports more than $1 billion in construction projects since their founding nearly a decade ago.