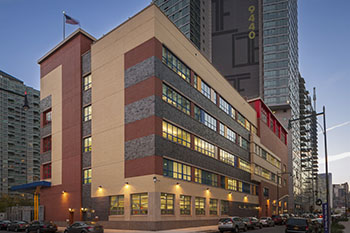 The PS78 Robert F. Wagner Jr. School has only five academic floors with a sixth mechanical floor but it is situated on a 25,000-square-foot site adjacent to a 42-story apartment building. As such, the school was designed on a tight site and needed to function in a way that made the surroundings seem less intimidating. Gran Kriegel accomplished this by designing the school so it orients south to a 3,400-square-foot playground that faces a state-owned park.

The design was created according to requirements from both the NYC School Construction Authority (SCA) and the Queens West Development Corporation. For instance, the SCA prescribes brick facades with punched or ribbon aluminum-framed windows, so the building’s façade incorporates a composition of brick, cast stone and metal panels.

SCA guidelines also standardize the size of school lobbies, but the authority approved the architect’s lobby concept, which features a larger lobby to improve flow through the school.

“The standard program lobby is quite small, but we managed to expand that a little bit and make it a very pleasant, sunlit space,” said David Kriegel, AIA, LEED AP, for Gran Kriegel Associates. “I think it’s one of the most successful areas in the school.”

A major design element that made the interior more playful was the use of tile patterns. Each floor has a separate palette of tiles, giving each one its own identity. 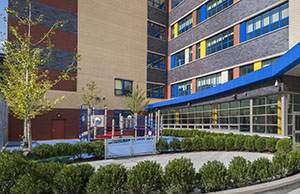 Because of the density of the site, one of the project’s biggest challenges was getting daylight into the double-loaded academic building. Not every program space was allowed access to light, but Kriegel said that the design team managed to create daylight on every floor as well as have seating in those areas.

“The challenge in a lot of New York City schools is that the sites are tight and they require a vertical orientation,” Kriegel said. “The challenge is in the stacking of the building and the location of the major spaces: the cafeteria, auditorium and gymnasium. [In this school], the gymnasium is on the top floor while the cafeteria and auditorium are on the lower floor.”

The design team was also able to provide a connection between the students and the outside community by putting street-level windows in the school’s auditorium and cafeteria.

Another issue that the design team addressed in the design was the area’s close proximity to the East River, which is prone to flooding especially as sea levels rise. The design team raised the first floor of the school two feet above the base flood elevation, which is higher than required by code. This extra step prevented damage to the construction zone in 2012 when Hurricane Sandy drove river water across the site.

Although there were several guidelines required on the site because of its urban setting, Kriegel said that the most fun part about designing this type of facility is coming up with different configurations for the site. The FDA required the design team create three schematic designs and take each one through a cost analysis.

“This is always an informative process because you learn what spaces are successful or what ones you’d like to design a little differently,” he said. “I always believe that the stairway in these schools is the most important social space and we always try to bring light into the space. In this project, we designed a corner southeast facing staircase. We were required by the FDA to put window guards in the interior, which made it less inviting, but I still think it’s a nice space.”

Despite the daylighting challenges, the school is designed to achieve LEED Silver. Design and construction followed Local Law 86 and the NYC Green Schools Guide, a LEED-equivalent system for building sustainability into new schools.