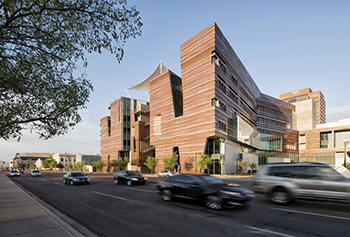 PHOENIX — Los Angeles-based CO Architects continues to receive awards for the $129 million Health Sciences Education Building (HSEB) at Phoenix Biomedical Campus in Phoenix, even two years after its original debut. The design firm’s most recent award recognizes the facility internationally, as it received first place in the World Architecture News (WAN) Façade Awards, an annual competition based in London.
The WAN Façade Award recognizes projects that use the latest design techniques to bring something new to building exteriors. CO Architects did this by creating a façade for the 268,000-square-foot building made from recycled copper paneling. The copper design and coloring reflects the Arizona desert landscape, and the two wings of the building meet to create narrow “canyons.” The folded copper creates long horizontal lines that “reflect the stratified earth rock formations in the surrounding Arizona desert canyons,” said Juror Steve Mudie in a statement.
The building was constructed to meet LEED-NC Gold certification. As such, the design paid special attention to the use of abundant Arizona daylight and responds to the area’s need to reduce energy consumption. The lower level of the building has lots of windows and fewer ones as the building gets higher for heat control. The south-facing facades combine overhangs with perforated screens to function as sunshades and vertical fins control on the north side of the building.
This is the 14th award for the facility used by the University of Arizona College of Medicine-Phoenix and Northern Arizona University. Last year it received the 2013 Honor Award for Architecture from the American Institute of Architects, California Council. Other awards for CO Architect’s design of HSBE include the AIA National Technology in Architectural Practice Building Information Model Excellence Award for Stellar Architecture Using BIM; the Best of LA Architects Award from the Los Angeles Business Council; an International Interior Design Association Southwest Chapter Pride Awards Design Excellence in Education and Outstanding Team on a Design Project award; and the Arizona Real Estate and Development Award for Most Challenging Project.
Ayers Saint Gross, with offices in Tempe, Ariz., served as associate architect and master planner for the project while a joint venture between DPR Construction and Sundt Construction, both with offices in Phoenix, led construction.