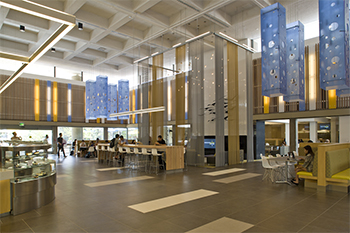 SAN DIEGO — The University of California San Diego (UCSD) debuted its latest student dining facility at Revelle College last December to keep up with the evolution of student dining trends. Today’s students want healthier food choices and a more interactive food experience. As such, locally based Studio E Architects designed the $12.1 million 64 degrees dining concept to provide a new kind of dining experience that puts the act of cooking and the natural beauty of food on display.

Created to serve as a popular commons area for the student residences in Revelle College, the restaurant was named 64 Degrees — after the average temperature in nearby La Jolla, Calif. (64 degrees); the founding year of Revelle College (1964); and the height of Roger Revelle (6 feet 4 inches). It took locally based Swinerton Builders, the general contractor, six months to complete the project.

The project included renovating approximately 27,000 square feet of the existing 33,500-square-foot, one-story building. The facility now seats 288 in the main dining area and 35 in the adjacent café or market. The exterior spaces were designed to accommodate seating of 190, with concrete seat walls providing additional seating. A variety of seating options are mixed among the food platforms, ranging from large six-person booths to counter seating to counter-height community tables to soft seating around the fireplaces.

The new restaurant was renovated from the original 1966 Revelle Dining Commons, which was the first dining facility on the UCSD campus and had not been renovated since the early 1980s, according to Eric Naslund, FAIA, principal at Studio E Architects. It was a traditional cafeteria in that there was a serving area, and students would grab trays and be served food cafeteria style. The seating area was totally separated from the actual experience of getting the food.

“Dining on university campuses nowadays is quite different than it was 50 years ago, maybe even 15 years ago,” Naslund said. “There is a big transition in how universities think about [dining], so we creating a new refreshed place to do what they do in a better way.”

To keep up with the times, the solution was to integrate these dining areas with the food service areas. There are now five different platforms, each with it’s own chef. “That’s the biggest shift in this project — integrating the display and act of cooking with the experience of dining,” Naslund said. “There is a larger cultural trend in paying attention to what you eat and watching it be prepared. There’s kind of a theater aspect involved. To be an active participant in it all is what this generation is looking for.”

To address the client’s desire to put the theater of cooking front and center, the design team created a large food station as a focal point within the former dining room, known as the Big Box, and relocated the main entry into this space. This is the first of four food stations within the facility, and it combines a deli, salad bar and wok station in addition to counter seating for guests to get close to the cooking action.

In addition to putting the food process on display, another component included the addition of an exhibition kitchen so that the school could host cooking classes, said Maxine Ward, associate at Studio E Architects. Audiovisual technology was integrated into this station to display cooking demonstrations on screens throughout the facility.

One of the challenges of the existing building was connecting spaces with different volumes into one dining environment, Ward said. The former Big Box had an abundance of light and 24-foot-tall ceilings, but it always felt empty, especially during off dining hours. The solution was to fill the large room with activity and with appropriately scaled design elements.

To create a sense of openness between the Big Box and other lower portions of the building, the design team removed dividing walls and added skylights to bring natural light into the depths of the building. The lower space features a ceiling plane that accents unique floating light fixtures and a focal point in the Demonstration Station.

Read more about this project in the May issue of School Construction News.