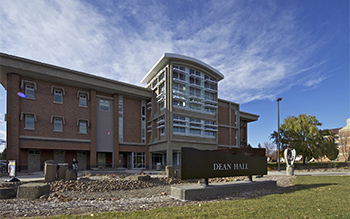 For many schools, colleges and universities, sustainability is now simply part of the institutional culture. Most school district and higher education officials have embraced various energy- and resource-saving technologies, but that doesn’t mean the work is done for planners, builders and manufacturers.

Q. How have you seen attitudes toward designing and building school and university facilities for long-term sustainability change in recent years?

Campanella: There is a better recognition by school districts and university owners regarding sustainable construction — and sustainability as an overall approach to how they deal with their facilities. Universities have mostly been on board with sustainability longer than the school districts, at least the districts we deal with here in eastern Washington, but it’s definitely starting to gain a tremendous amount of momentum. In some ways universities were forced to adopt green standards earlier. Washington state law now requires facilities of a certain size and type to be LEED Silver certified or greater. The higher education facilities folks were more or less required to get on board, however the standards didn’t apply to school districts back when they were originally approved by the governor.

Dobyns: I would agree. We’re seeing more value put on long-term sustainability and less resistance. When sustainability originally became a trend, some districts — or even designers — weren’t embracing it because there were some added costs, but that’s no longer an issue. It’s become standard practice. It’s easier now to make a case for the added cost, and it’s acceptable to put sustainability as important criteria on every project.

Proehl: When we first started seeing “green buildings” it was a novelty and wish list item, now its commonplace. While many owners may forego the formal certification process, they are directing the design teams to specify green building materials and design to LEED standards.

Q. How has the trend toward building more sustainable facilities impacted or improved the way you do business?

Campanella: Since we first began to move towards LEED buildings, any added costs have been absorbed. Sticker shock on the part of building facilities owners and school districts has gone away because most everything now is designed and built around some level of sustainability. Depending on the level of sustainability you design and build to, there are things that cost more than the baseline, but we’re seeing less and less of the issues we saw five to ten years ago with LEED and sustainable construction. Now it has become so mainstream that it is built into the way we think and the way projects are delivered.

Dobyns: When the idea of putting sustainable practices into a project was not required, and there was an extra cost, it was a competitive disadvantage if we chose to do it. Now it’s no longer a disadvantage. Because it’s widely accepted, it has helped us stay competitive.

Proehl: The globalization of sustainable design has also made it easier to get green products and opened up new opportunities for recycling and reuse of reclaimed products that would have normally ended up in landfills.

Q. For schools and universities, what barriers still remain when it comes to expanding sustainability efforts?

Dobyns: In the school design side of the industry there is a lot of creativity and new ideas out there. However, the cutting edge ideas sometimes can be costly, and schools are always on tight budgets. Trying to sell that added cost vs. the benefits of sustainability are very new ideas. It sometimes can be politically challenging.

Proehl: In many cases the biggest barriers are the direct cost of the certification process as well as the added on-site personnel that is required to record, log and track the products used and the recycling of waste material.

Read more of this Q&A in the upcoming January/February issue of School Construction News, available soon.