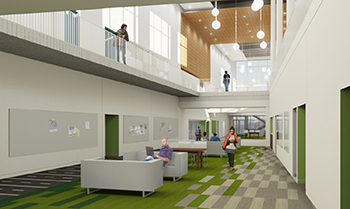 FALL RIVER, Mass. — Boston-based Sasaki designed the John J. Sbrega Health and Science Building, which is scheduled to debut at Bristol Community College in Fall River in April 2016. The primary goal of the project was to create a state-of-the-art laboratory facility for science and health science, unifying pure and applied disciplines under one roof.

Q: What are some of the building’s key design elements?

Moses & Crowell: While looking for the expression of innovative design elements in the building form, there were also a number of design elements intended to integrate the building into what is a fairly homogeneous campus. A few of those contextual gestures include the use of brick, an exterior covered walkway and the distribution of active lab spaces on two stories. The campus also has an interesting strategy for managing stormwater, using a system of open swales to move water from buildings into the city sewer. The effect is to make the campus community very aware of how water moves from buildings to underground systems. Our building takes that a step further by incorporating three-sided downspouts on the outside of the building, so you can see clearly water moving from the roof into the swale system.

We were also interested in distinguishing this building from others on campus, in part because one of the goals was that it behave as a ‘gateway’ building for the campus. It needed to communicate something special, which it does in a number of ways. The first is that the labs are located around a shared atrium, or student living room, which is important not only because it addresses a shortage of student-oriented study or hangout space on campus, but also because the atrium becomes a way to move from the edge to the center of campus. Its public nature is communicated by glass walls, which allow views of activity inside. The atrium is ‘capped’ by a figural roof that creates deep overhangs, which are meant to make the space inviting. The roof is wood and is supported by exposed steel, a system inspired by old mill buildings of Fall River. Within the building, glass walls separate labs from the atrium. The glass is partly opaque, and can be used as whiteboards, and partly clear, to allow views into the labs — putting science on display.

Finally, the placement of the building created the opportunity to design an active courtyard space, which is a new type of space for the campus. This space will be planted with native species, including ones that will be allowed to climb up onto the building. Overlooking this courtyard is a small green roof. The courtyard’s pavers continue from exterior to interior, suggesting that the campus pedestrian system moves through the building. The paving pattern was inspired by textiles produced in local mills. In addition to traditional paving, we incorporated crushed seashell within the courtyard. We were very interested in grounding the building in the landscape, not only of the campus, but also of the South Coast region.

Q: What green building elements will help the facility achieve net-zero energy use?

Moses & Crowell: The most critical aspect of getting the building to net-zero energy was to substantially reduce energy consumption, which, compared to a theoretical baseline, we were able to do by around 80 percent. Importantly, we were able to do so without increasing the budget. There are numerous elements that work together as a holistic system, but the three primary ones are:

The real key was developing the right building type, not just throwing technology at the problem. We needed to understand how everything worked together and be smart about specific choices. We achieved this thanks to a fruitful collaboration with BR+A, our mechanical and electrical consultant, and Haley & Aldrich, our geothermal designer.

A host of other elements from solar hot water to a high performance envelope to LED lighting were also important pieces of the puzzle.

Moses & Crowell: There were multiple workshops with faculty. They are the ones who best understand their pedagogical approach within the community college structure, so their feedback was critical in terms of design of the lab spaces. A number of faculty and staff were also on the building committee, so they had a voice in of the overarching goals and progress of the design

Q: How does this project differ from ones you have both completed in the past?

Moses & Crowell: The central difference was the client’s commitment to sustainability and understanding of climate change as the defining public policy issue of the century. The construction of the site PV array is emblematic of this commitment, but it goes much deeper and begins with the president, Jack Sbrega, who was a founding signatory to the American College and University Presidents’ Climate Commitment. His seriousness has set the tone for how to proceed on campus. We have been very fortunate to work there.