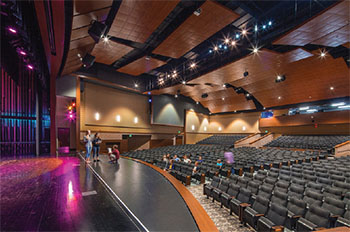 FRANKLIN, Wis. — Franklin High School debuted a new Performing Arts Center in March 2015. As part of the construction project, the school also decided to renovate the interiors to provide better functionality for the students and staff as well as enhance safety and security.

School Construction News spoke with Chris Michaud, LEED AP, design architect, associate for Milwaukee, Wis.-based Eppstein Uhen Architects, which served as the architect on the project, about several enhancements made to the school.

Q: What were some of the key design elements involved in the Franklin High School project?

Michaud: It was very important that we created large breakout and commons spaces for the students throughout the school to use as extensions of the learning environments as well as places to socialize, and to incorporate a lot of transparency from space to space as well as to the exterior. In the prefunction space for the auditorium, we incorporated comfortable furniture groupings for students to use during the school day. This space’s extensive use of glass creates a wonderful daylit environment for students during the day and a glowing beacon at night for evening performances.

Q: What were the safety and security measures included in the facility design?

Michaud: A large component of the project included reorganizing site circulation and expanding parking to increase site safety. The site transformation allowed for all students to park on site rather than parking off site along busy surrounding streets and separated parent pick-up traffic from bus traffic. The building also employs a high degree of transparency on the exterior as well as the interior, which promotes an “eyes on the street” approach, ensuring that the well-being of students is paramount, minimizing misconduct through passive supervision. Staff and administrators have clear, unobstructed views of the surrounding site, allowing a visual assessment of visitors before they even reach the school doors.

The school is also broken up into a number of smaller areas — all with the ability to be locked down instantaneously, creating a multitude of barriers within the school that limit the advancement of an intruder. Within the PAC, the music suite uses fully glazed doors to its ensemble spaces and practice rooms to aid in supervision, and the entire area can be locked when classes are not in session.

Q: How was technology incorporated into the facility?

Michaud: The PAC uses a number of state-of-the-art technologies in lighting and sound. Video and audio feeds connect to the surrounding prefunction space, dressing rooms and ensemble spaces. The prefunction space was also designed to allow for small ensemble or theatrical performances to occur before and after performances. The music lab, which incorporates a number of Musical Instrument Digital Interface (MIDI) consoles, has an adjacent recording studio and engineering room, and the band, orchestra, choir and performance spaces are all able to record to this lab. The main performance space (as well as the band, orchestra and choir rooms), were all acoustically modeled by a sound consultant, ensuring the desired acoustical performance.

Q: Was the project designed with LEED certification in mind?

Michaud: While the client did not plan to pursue a LEED rating, we did employ a number of green strategies, including on-site stormwater management, LED light fixtures, energy-efficient mechanical equipment and high-performance glazing.

Q: How does this project compare to those you’ve completed in the past?

Michaud: Something that was paramount on this project, that we find ourselves doing on many projects, is designing spaces that shift from a teacher-centered model of traditional classroom instruction to a student-centered model that focuses on spaces that promote collaboration, team-teaching and interdisciplinary, project-based learning. The PAC was designed to provide not only a first-rate performance space, but also a space for students to use independently to create, compose, choreograph and collaborate with their peers throughout the day. On a larger scale, the PAC has created a sense of pride within the community as a great performance space for students and community groups alike.