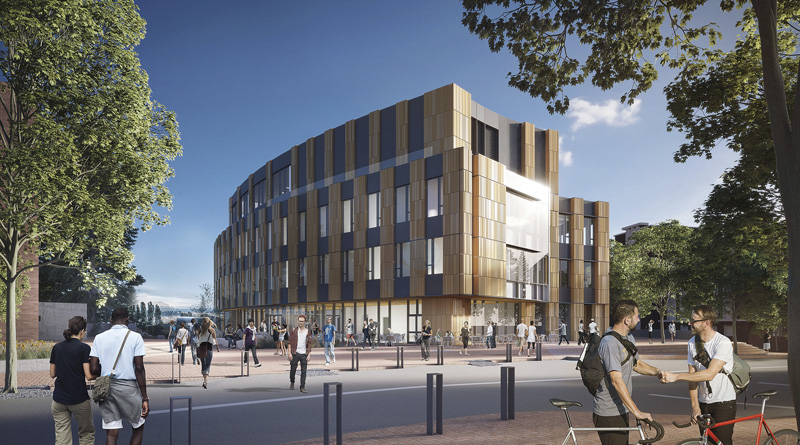 SEATTLE — On Jan. 12, the University of Washington (UW) Board of Regents approved a budget plan to establish a new $110 million computer science and engineering facility on the university’s Seattle campus. The 135,000-square-foot building will be funded in part by corporate partners including Amazon, Zillow and Microsoft, and will help the university expand its highly popular computer science and engineering program.

The new building, referred to as CSE2, will complement the existing Paul G. Allen Center for Computer Science & Engineering, also located on the Seattle campus, and will double the computer science and engineering program’s capacity. While the Paul G. Allen Center provided a significant boost to the program when it was completed in 2003, the university has since seen requests for enrollment skyrocket as the region is now home to both successful startups and leading tech companies. In a background document outlining the project’s need, the university noted that in the 14 years since the Paul G. Allen Center debuted, the computer science and engineering undergraduate program has doubled in size, and the graduate program and number of faculty have each grown by 50 percent. In that same time period, the program’s annual research funding has tripled and computer science and engineering has surpassed business administration as the university’s most sought-after major.

Upon completion, CSE2 will provide new instructional and collaborative spaces, expanded research labs and a sophisticated makerspace. An undergraduate commons area will offer space for students to study, relax or work collaboratively, while dedicated interview rooms will allow industry representatives to meet one-on-one with students. A tiered, 250-seat auditorium to be named the Amazon Auditorium will accommodate large classes and department colloquia. Meanwhile, research labs, robotics workshops, graduate seminar rooms and graduate-student offices will cater to higher-level students, according to the project website. A large, flexible commons space to be named the Zillow Commons will enable the university to host a variety of events and functions.

“Together, CSE2 and the Allen Center will enable [UW] to provide an unparalleled education and research experience to students, and to engage in even more robust collaborations across the campus, the region, and the globe,” the website continued.

The project’s design team was also responsible for the Paul G. Allen Center, and includes LMN Architects of Seattle and M.A. Mortenson Company, headquartered in Minneapolis. The building is currently set to open in January 2019.