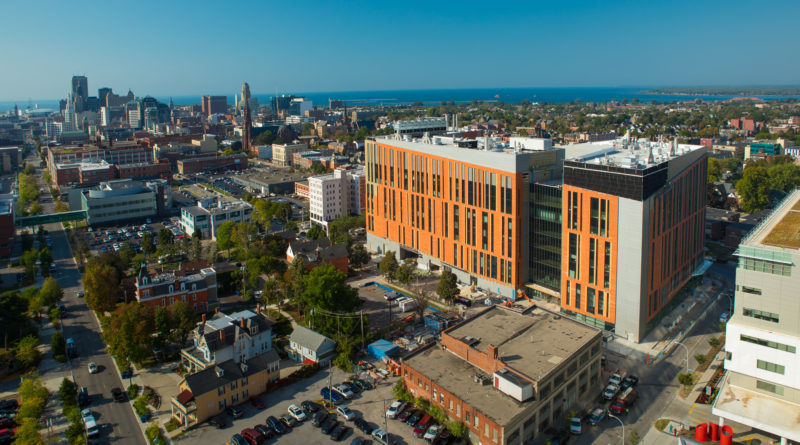 BUFFALO, N.Y. — The new Jacobs School of Medicine and Biomedical Sciences building at the University at Buffalo (UB) was completed in October — four years after the groundbreaking ceremony in October of 2013. The grand opening is scheduled for early December, and students will be using the building the first week of January of 2018. The new facility is targeting for LEED Gold certification.

HOK, based out of New York, was the architect on the project, and LP Ciminelli out of Buffalo served as general contractor. The 628,000-square-foot building had a budget of $375 million. The State University Construction Fund and University at Buffalo was the owner of the project.

“Expansion of medical schools is a national and regional necessity today,” said Cain. “Physician shortages in western New York range from moderate to severe in some specialties — including primary care.”

The new building has made it possible for the Jacobs School of Medicine and Biomedical Sciences to increase its class size by 25 percent, from 144 to 180 — in line with recommendations by the Association of American Medical Colleges, according to Cain.

The new medical school is physically connected to the Buffalo Niagara Medical Campus by an enclosed bridge, which will greatly serve the function of the faculty, researchers and students who have clinical responsibilities on the Niagara Campus.

“The design sandwiches the three research floors between the more public parts of the medical education program on the lower floors and the more specialized, pedagogical components, such as the human anatomy suite, on the upper floors,” said Schwartz. “A common atrium and second-floor ‘piano nobile,’ or principal level, fosters collaboration between educators, researchers and the greater Buffalo Niagara Medical Campus community.”

The new facility — which is targeting for LEED Gold certification — features a high-performance terra-cotta rain screen and a glass curtain wall system that brings daylight deep inside the building. The campus-housed station accentuates community connections as well as promotes sustainable transportation options.

In addition, there is a pedestrian passageway with a bike share facility that extends through the building, connecting Main and Washington streets, leading to Allen Street and the eclectic Allentown neighborhood.

Another key design feature of the building is that it was designed without a main dining facility so that area restaurants and stores will have a resulting economic benefit. “We designed the new medical school building with an eye toward contributing to economic development in the neighborhood,” explained Laura Hubbard, UB’s vice president for finance and administration. “We want medical students, faculty and staff to be out in the community, patronizing local businesses.”

The new medical school, populated by physicians and medical students alike, will bring 2,000 more people to downtown Buffalo each day. “HOK’s design for UB’s medical school creates the heart for the Buffalo Niagara Medical Campus while integrating and connecting to the surrounding communities,” noted Kenneth Drucker, FAIA, design principal for the project and design director for HOK’s New York office, in a statement.