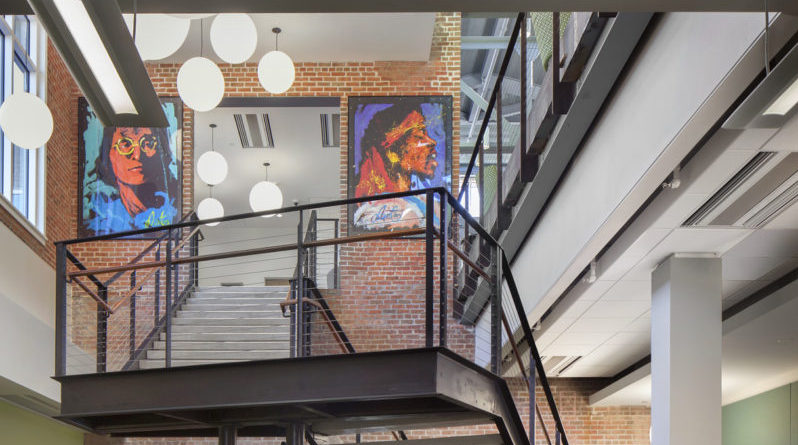 Established in 1912, the college is now the largest tech school within the SUNY system, boasting more than 9,400 students. “Creating a spacious and attractive new home for our student organizations and clubs is the new chapter for this historic and beloved campus landmark,” said Farmingdale State College President John Nader in a statement.

The $12 million project consisted of a total gut and renovation with partial structural redevelopment of the brick, masonry, concrete and steel building. Likewise, the complete mechanical, electrical and plumbing systems were replaced, and ADA-compliant modernizations and energy-efficiency upgrades were also implemented. The project was overseen by general contractor Stalco Construction and BRB Architects (both based in New York).

Originally used as a power plant, the college wanted to preserve the structure’s early 20th century industrial aesthetic. “We set out to create a design that would have an industrial look, in recognition of the structure’s original purpose, while updating it to create modern and attractive interiors. To do this, we included partially exposed brick walls and structural steel, and we maximized the natural light coming in by adding clerestory windows,” said Joseph Zappulla, the architect-in-charge at BRB, in a statement.

The radio station now has an office and a broadcasting studio, with a DJ room installed inside of an acoustical box. The studio is equipped with an acoustically rated door and windows, five layers of sheetrock with acoustical clips between the wall layers and acoustical ceiling tiles on acoustical springs and additional Guilford of Maine FR701 2100 acoustic wall panels.

“The functional program for the interiors was developed by a committee of college employees and students, and was finalized in the early stages of the project,” said Zappulla. “The team wanted to create a vibrant and exciting environment that would incorporate all student activities and unite them in one place.”