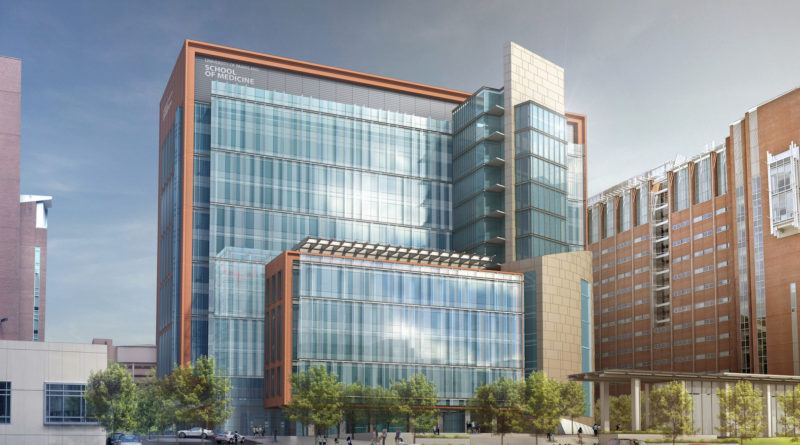 HOK Architects, based out of its Washington, D.C., office, designed the facility in association with Design Collective of Baltimore. The construction manager on the project was the Barton Malow Company headquartered in Southfield, Mich. Jacobs headquartered in Dallas collaborated on laboratory planning and programming. LEED Gold certification is anticipated for the new science facility.

The budget for the 428,970-square-foot building was $305.4 million. Expected to advance UMB’s position as academic research leaders, the facility is aimed to be a critical tool in recruiting and retaining the best faculty, students and staff.

“The Health Sciences Facility III further strengthens our footprint in west Baltimore and, as a result, our economic impact on the city and the state,” said Jay A. Perman, M.D., president at the University of Maryland. “We’re privileged to be able to help revitalize our critically important Baltimore neighborhoods and the state of Maryland as a whole, and at the same time, enable biomedical research and education that has the potential to save lives.”

The new research facility will be the largest state-funded higher-education project to ever be delivered on UMB’s campus, and will enable the School of Medicine to retain its position as one of the leading biomedical research institutions in the world, according to Perman.

In addition, the new facility will house new research programs for the Universities Schools of medicine, dentistry and pharmacy. “Specifically for growth, no existing programs were intended to move,” said Timothy O’Connell, principal in charge and regional leader of science and technology at HOK. “Each dean had their own vision for how the facility should be designed so HOK used an iterative design process with multiple teams to drive decision making.”

Multiple teams helped to successfully schedule the groups to make quick efficient decisions, including the building project team, the faculty scientific advisory committee, the executive committee, and the operations and maintenance committee, according to O’Connell. The planning, programming and concept design was completed in 16 weeks.