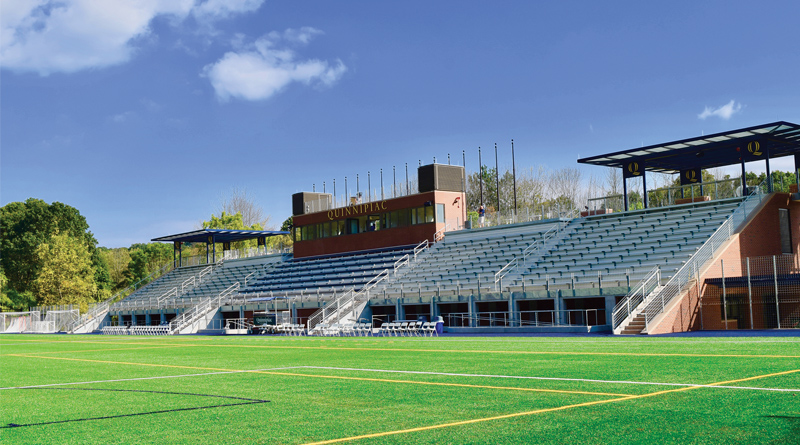 The soccer and lacrosse venue includes permanent seating for up to 1,500 spectators. Photo Credit: Quinnipiac Athletics

HAMDEN, Conn. — As the old adage goes, “Good things come in pairs” — a notion that Quinnipiac University in Hamden seems to have taken to heart with two new sports venues underway at its campus.

The adjacent facilities will serve as many as five athletic teams at the university (Go Bobcats!), with one designed for both men’s and women’s soccer and lacrosse, and the other intended to accommodate women’s field hockey. After four years in the making, a ribbon-cutting ceremony was hosted at the new stadiums this past September, just in time for the 2017-18 season.

The university paid approximately $28 million for the initiatives, which includes the cost of design, construction, approval, equipment and related miscellanea. As with previous projects, Centerbrook, Conn.-based Centerbrook Architects & Planners (CP&A) was the university’s go-to design team.

“Centerbrook has been doing work at Quinnipiac for many years. Our relationship is good,” observed Sal Filardi, vice president for facilities and capital planning at Quinnipiac University.

Founded in 1929, the private university is located near Sleeping Giant State Park and offers 58 majors. It also prides itself on its athletics program, which includes most collegiate sports that require a ball, racquet and/or cleats — sans football.

“Quinnipiac doesn’t do everything, but what we do, we try to do at the very highest levels,” Quinnipiac University President John Lahey opined on the school’s athletics website. “These two stadiums, the complex, facilities and fields are certainly the best quality you are going to find anywhere in higher education today.”

The looming question, naturally, is why two new venues, and why are they adjacent?

“The venues are essentially renovations of existing fields,” said Filardi. “The new lacrosse soccer stadium occupies a similar location as our old artificial turf field, previously used for lacrosse and field hockey, and the new field hockey stadium occupies the space where our old grass field, previously used by rugby, was located. The rugby program currently uses the old grass soccer field across the street that was renovated into a full-sized rugby pitch.”

The renovations proved fruitful for the two-time defending national champion Quinnipiac women’s rugby team, which won its season opener against longtime rival Army West Point at its first-ever game on its new field at the university’s Mount Carmel campus.

“The two venues will work in tandem to create a unified athletic complex that also safeguards the adjacent wetlands,” said CP&A Partner Jeff Riley, FAIA, in a statement. “Abundant plantings and low-profile structures will merge harmoniously with the wooded setting.”

Both venues maintain the traditional look of Quinnipiac’s main academic and residential campus architecture with brick and cast stone façades.

“Brick and cast stone is a pretty typical design aesthetic and construction detail. The design was intended to tie the structures into the campus aesthetic,” said Filardi.

Besides matching its aesthetic forebears, each venue features a full complement of support spaces, including locker, team and training rooms for the competitors and staff as well as broadcast-ready press boxes for the media, and First Aid and restrooms for spectators.

Construction on the soccer and lacrosse venue began last fall. The project includes permanent seating for up to 1,500 spectators and an infill turf playing surface. There are also two covered terraces for spectators and special events located on top of the grandstand. Earlier this year, construction began on the field hockey venue. This includes permanent seating for up to 500 fans as well as an artificial turf field. Consistent playing conditions will be maintained through a high-velocity irrigation system set around the periphery of the pitch.