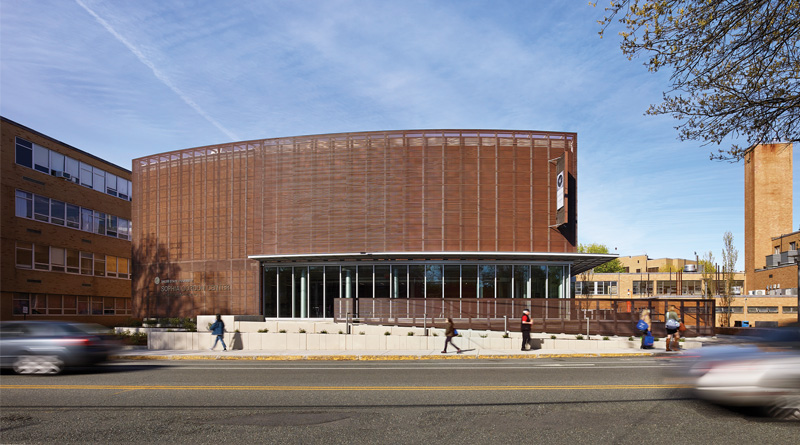 As a contrast to the vibrant inside, the exterior colors of the building are muted. Photo Credit (all): Alan Karchmer/OTTO

SALEM, Mass. — The renovation of the Sophia Gordon Creative & Performing Arts Center at Salem State University was completed in January. The new fully renovated, state-of-the-art theater opened its doors in April with a performance of Bob Martin and Don McKeller’s musical comedy, “The Drowsy Chaperone,” a parody of American musical comedy of the 1920s.

The architect on the project was Leers Weinzapfel Associates, with Whiting-Turner Construction Co. serving as the general contractor — both of which are based in Boston. The 33,000-square-foot project had a budget of $22 million, with a 24-month construction cycle until its completion in April. The project began programming in 2013 as a result of a foundational gift, but did not come to fruition until 2015 when further financial support was achieved, according to Andrea Leers, FAIA and principal architect on the project from Leers Weinzapfel Associates.

The long-awaited renovation transformed the mid-century theater facility into a vibrant theatrical teaching, performance and support space for modern pre-professional students. The original building was constructed in 1958 and served as a general use auditorium. The original 650-seat main stage theater building was in need of reimagining, according to Leers, no longer meeting the current needs of the theater department and the wider university.

The design for the project reflects Salem State’s departmental goals and maximizes the space within the existing building shell by providing a balcony and a more intimate theater. The original 700-seat theater was transformed into a “more appropriate” 490-seat theater, since student performances almost never filled 700 seats, according to Leers. The facility now has three theaters with the inclusion of a lobby that doubles as an alternative performance space. Additionally, the new space has a large rehearsal room, green room, dressing rooms, scene shop, sound lab, light lab, prop storage and conference spaces.

Special state-of-the-art features of the new building include a full-stage lift and the ability to raise and lower the piano for the many musical productions that Salem State puts on. Additionally, an outdoor ampitheater performance space was created during the renovations, which in addition to providing another performance space, also improved overall accessibility to the building, according to Leers. “The previous entrance to the building was so inaccessible that it was basically a service entry,” said Leers. “Now, in addition to a fully lit and amplified outdoor performance space, the outside building envelope is wrapped in a new perforated metal screen, which not only transforms the aesthetic of the entire building, but it also relocated the entry.”

One of the challenges on the project was creating a state-of-the-art performance space on a limited budget, according to Leers. “We had big aspirations on a shoestring budget,” said Leers. “We were always looking for the elements to create the most impact that were at the same time the least costly. It is a very simple project materially for that reason.”

The choice of materials to stay within budget also impacted the visual design of the building, according to Leers. Regarding the design team’s choices around aesthetic design — the original shape of the auditorium had a slightly curved front. The design team used the design of the original building’s curved walls as a theme throughout the entire building, according to Leers. This curved theme was applied to the inside wall of the lobby, the upper gallery, the balcony and the seating of the audience chamber itself. On the exterior of the building is an accessible ramp with screening, “each piece of which is a broad curve inviting everyone in,” according to Leers.

In terms of the aesthetics of the interior of the theater, deep colors such as eggplant and dark reds were chosen for the theater audience chamber. “This color combination creates a rich and vibrant atmosphere for this beautiful theater,” said Leers.

As a contrast to the vibrant inside, the exterior colors of the building are muted, with a bronze-colored screen wrapped around the building, with the remaining parts of the building consisting of uncovered brick. “The screening is a kind of ‘theater mask’ on the old building, which allows you to see through it and reveal all of the new activities inside,” said Leers.

The Sophia Gordon Creative & Performing Arts Center was renovated to LEED Gold standards and is expected to achieve certification by the end of the year. The original building had no insulation, or central heating or cooling, and now has high-performance heating and air-conditioning systems, and a high-performance facade. Additionally, there are water-saving features in the building as well as other energy-savings measures, but the real savings came from reusing the building in the first place, according to Leers.