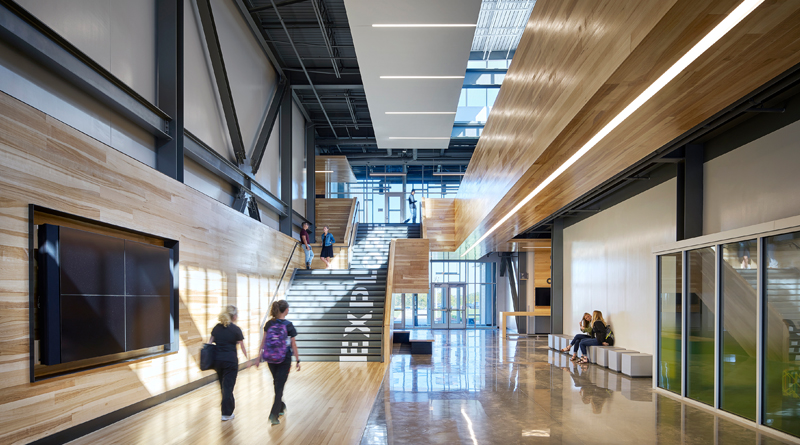 The Missouri Innovation Campus (MIC) in Lee’s Summit, Mo., isn’t just a building. It’s a program that’s changing the way students experience education and prepare themselves for the workplace.

Students can start the MIC program their junior year of high school by attending STA, a program that offers students dual-credit classes that prepare them for careers in engineering, computer science, healthcare and multimedia. During the time it takes students to complete high school, they will have earned an associate’s degree from Metropolitan Community College, interned at a local business and then can finish their four-year bachelor’s degree from UCM just two years after they graduate high school.

The MIC program also integrates students into the community by requiring them to complete three years of paid internships with companies based in the Greater Kansas City Metropolitan Area. Not only does this help alleviate the costs of education, but it also helps prepare students for the working world. In total, there are 500 metropolitan students in STA, 1,000 students in UCM and approximately 100 MIC students amongst them.

“The goal of the MIC is two-fold: to meet workforce demand for top technology-talented students and to eliminate massive college debt by reducing the time to degree completion,” said STA Principal Elaine Metcalf.

A new building for MIC was completed in time for the 2017-2018 school year. Before the new building was built, MIC was spread across two locations. Now, students have access to all the technologies they could want or dream up. In fact, the new campus was built with flexibility in mind to accommodate future technologies and curriculums.

“This building is designed to meet the needs of the Kansas City marketplace, and it’s always going to change,” said Kevin Greischar, AIA, principal for DLR Group. “As the marketplace and local industry evolve, so will this building. There are walls that are permanent, walls that are built for 10 years and ones that could come down tomorrow if need be.”

MIC held a grand-opening ceremony for its new home on Sept. 5. This debut date was also perfect timing to show off the new facility to attendees at the national EDspaces trade show, held in Kansas City, Mo., from Oct. 24-27, at which School Construction News was in attendance.

From the outside, the 135,000-square-foot building features sleek aluminum sheathing and an industrial-style finish that matches the interior that is spread across two levels, featuring high ceilings and lots of windows to bring in natural light. The design was a collaboration between DLR Group as the architect of record and Gould Evans as design partner, with McCownGordon Construction serving as general contractor on the project. All three companies have offices in the Kansas City area.

The $30 million facility features 60 classrooms as well as shared spaces designed to welcome students from both STA and UCM as well as ones that are designated to specific programs: networking, engineering, medical, bio medical, graphics, hospitality and cybersecurity. Most of these spaces have moveable panels so that spaces can be combined or separated as needed. The furniture — most of which is on wheels — also encourages flexibility and movement.

“This building is probably the most specific we have been involved with, where the curriculum defined the physical space and adjacencies,” Greischar said. “The staff was already teaching in ways that a building like this would let them do but in a building that wasn’t designed for it. Instructors and learners will only flourish in this environment.”

The building was designed to have what Greischar called a “Main Street,” with neighborhoods that include a front and back porch that get a bit quieter as students make their way down the neighborhood corridor. Because the facility is designed to prepare students for the workforce, it really feels more like a Google- or Facebook-type tech office space than a college. The traditional high school environment is completely gone, with a more open concept so that classrooms are not closed off. Classrooms bleed into the hallways and vice versa allowing learning and teaching to occur everywhere.

“The real difference is that teachers give students a problem to solve, and then ask the students to solve it with the available tools,” Greischar said. “A big part of the educational experience at MIC involves collaboration and this idea that ‘you win as a team.’ The idea was to create an environment where students could go to solve problems instead of spaces where they could go to have their heads filled with lecture-style learning.”

Another aspect that Greischar said the design team had to consider was creating a space that encouraged a level of trust between parents and teachers that students could manage themselves and their own time, especially since some students at the school are only in high school and are working around college-age students. While the students typically work apart from one another, there are times when they work together, especially when MIC brings in a lecturer or other guest speaker.

One such space that truly deviates from the traditional high school setup is the upper-level lounge area with an outside terrace. It was originally conceived to be a library, but instead, it provides a place for students to plug-in and eat or chill out before starting their schoolwork.

“The new space promotes and facilitates very intentional ways to help students practice the professional skills that are needed to be successful in the workplace,” Metcalf said. “Also, the flexibility and openness of the design supports a changing curriculum of the next-generation workforce.”

To read the entire article, check out the November/December issue of School Construction News.