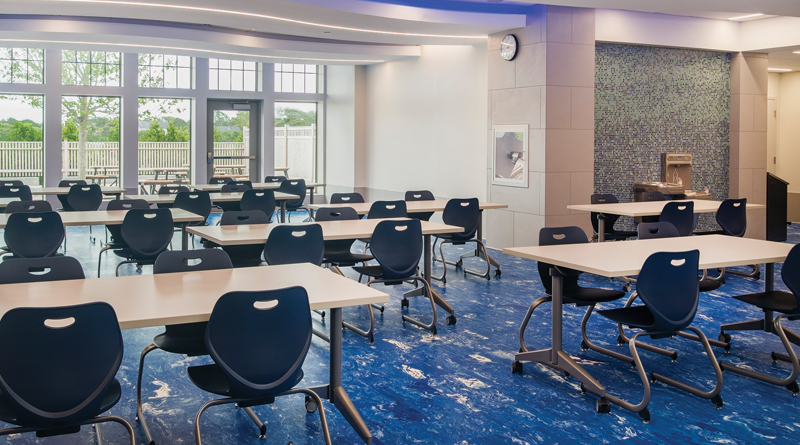 From the floor to the ceilings of the new school, the soothing colors of the ocean and wave motifs can be found in nearly every facet of the new scholastic space.

NANTUCKET, Mass. — The new Nantucket Intermediate School (NIS) is a welcome addition to the school system and surrounding Nantucket community. In addition to featuring a beautiful ocean-themed aesthetic inside and out to reflect life in an island community, NIS will help to accommodate severe overcrowding at the Nantucket Elementary School (NES).

NIS opened just in time for the 2017-2018 school year — and not a moment too soon. If NIS hadn’t been ready, there would have been a whopping 719 students in attendance at NES, a school originally designed for 500 students. The construction of NIS offers a now significantly more balanced and even distribution of students between the two schools — with 367 students at NES and 382 students at NIS (with an overall capacity to house 450 students).

The division of students into the two schools was accomplished by splitting the younger grades between the two buildings; pre-kindergarten through second grade will remain at NES, with grades three through five at NIS. Additionally, an 8,260-square-foot, six-classroom addition was made to the existing Cyrus Peirce Middle School.

SMRT Architects and Engineers, based in Andover, Mass., was chosen as the architect on the project, with Marshfield, Mass.-based Brait Builders serving as the general contractor. OPM: Colliers/Strategic Building Solutions, based in Agawam, Mass., served as owner’s consultant on the project. The two-story, 73,214-square-foot building had a construction cost of $35.7 million.

Nantucket, a coastal community — originally steeped in fishing and whaling — has a “well-established vernacular from an architectural perspective,” according to Richard Webb, principal and project manager at SMRT. “There is a very specific look throughout the island, and we had strict guidelines around that from a historical perspective. The exterior facade needed to respond to the standards that are well-established on the island, and we needed to be cognizant of these elements in order to form a truly cohesive look.”

From the floor to the ceilings of the new school, the soothing colors of the ocean and wave motifs can be found in nearly every facet of the scholastic space. The interior design of the building implements a palette inspired by coastal hues, with greens, blues and curves throughout the building to mimic wave patterns, as well as the inclusion of natural light throughout. Jeana Stewart, interior designer at SMRT, worked with local photographers to select images of three iconic lighthouses that are backlit in the hallway.

On the exterior of the building, sloped shingle roofs, cedar shakes, colors of white and grey, and wood trim are just some of the elements that SMRT used to blend into the existing Nantucket fabric.

“We were inspired by the beauty of the area and by the cultural community on the island, and we really wanted that to come through in the design,” said Stewart. “The color palette and wave motif are really soothing and inspirational for the students, and we’ve gotten a lot of positive feedback about that particular part of the project.”

The layout of NIS has each grade arranged in a pod configuration with seven individual classrooms surrounding a common multi-use, general classroom space. The new school also features a full-sized gymnasium, a media center and cafeteria spaces that open to a screened outdoor terrace for dining and other activities.

In addition, SMRT completed a redesign of the campus, which included parking, circulation and athletic fields. Drives and parking on campus were redesigned to improve both campus and off-site traffic flow — which was a chronic problem, according to Webb. There are now separate, dedicated parent and bus drop-off loops, with the site configured so both schools can share both loops, saving space. Additionally, staff parking was relocated and expanded, and there are now parent drop-off parking areas, which are critical for elementary schools in particular, according to Webb.