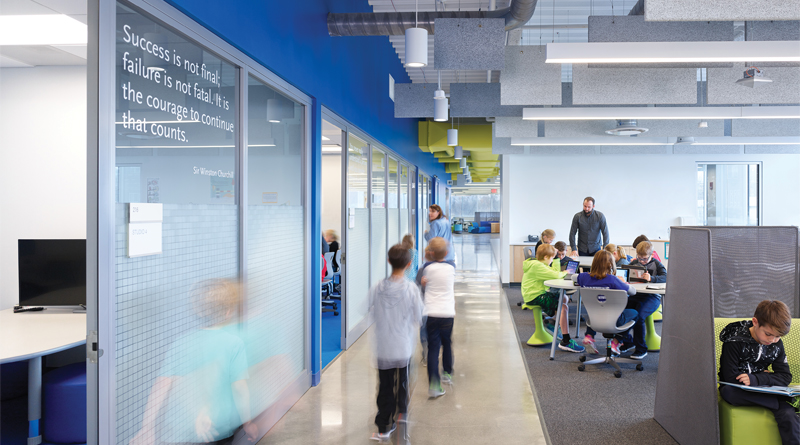 The SAGE program is just one of many gifted programs throughout the state of Missouri. Photo Credit (all): Alistair Tutton Photography

Students participating in the Students in Academically Gifted Education (SAGE) program within the North Kansas City School District must have an IQ of 128 and above. Ever since the program’s inception in 1974, it has given these academically gifted students a curriculum that further develops their already advanced skills. Because programming was previously held at varying locations, the district’s approximately 950 SAGE students had been participating in the SAGE program at designated schools — until now.

The Northland Innovation Campus — often referred to as the SAGE Center — in Gladstone, Mo., (a suburb of Kansas City, Mo.) provides a truly innovative space that helps foster the exceptional skills of all 950 SAGE students that come to the facility from 26 schools on a one-day-a-week rotation. The facility pushes the boundaries of education design and serves as a permanent home for the 12 students in third, fourth and fifth grades who participate in the Program for Exceptionally Gifted Students (PEGS) and who have an IQ of at least 140.

“The goal of the SAGE Center was to bring students together so that they could be supported with their like peers, allowing them to talk on the same level and be challenged on their high-achieving levels,” said Dr. Danelle Marsden, principal of gifted programs at the SAGE Center. “Each of the kids is unique and has special needs, so we wanted to foster their uniqueness and develop their individuality. Many students struggle with figuring out where they belong and who they are as individuals, so we want them to work in a student-centered environment specifically designed to meet their needs.”

The SAGE Center’s curriculum uses a STEM approach, emphasizing math and science in a technology-rich space that allows students to research and create, while also supporting the students’ emotional needs by emphasizing individualized learning as well as how to work with others. Because some students are afraid to fail, the program also encourages the idea that “failure is an option” and can in fact stand for something else entirely such as “first attempt in learning,” Marsden said.

That student-centered approach set the stage for the entire project, which ended up mimicking the planning of a contemporary office space more than a traditional educational space. The studio-esque design features very few walls and no specified classrooms in an effort to prepare students for the real world, with a multipurpose hall, learning stairs, studios, outdoor classrooms, video production rooms and lab spaces replacing the traditional school layout.

From Flintstones to Jetsons

The SAGE Center was an interior fit-out project that essentially takes up 3.5 floors of a five-story building originally built as a blank slate. It’s a collaboration of several parties, including the city of Gladstone, North Kansas City School District and Northwest Missouri State, which happens to occupy the top floor of the building.

The project was accomplished in two phases. Completed in August 2016, the first phase included the K-5 portion of the project, for which Chicago-based Perkins+Will served as the design architect, locally based Hoefer Wysocki Architects served as the architect of record and locally based McCownGordon Construction served as the general contractor. The second phase was completed last summer by Hoefer Wysocki, which essentially used the same principles from the K-5 portion and applied it to a middle school portion. All said and done, the K-5 program takes up the first two floors with the middle school taking up floors three and half of the fourth floor.

“The driver of the project was the superintendent of the school district who has since moved on, but at the time, he wanted to do something really innovative and create a space that pushed people out of their boundaries and beyond their preconceived ideas of classrooms and what school space should be for these kids to be more in line with the progressive program,” said Julie Michiels, AIA, senior project designer, associate principal for Perkins+Will. “He wanted to make sure it wasn’t just a replication of what they were already doing but looked at creating something that will really be flexible enough to last for generations to come.”

To accommodate this “school of the future,” Michiels said the design team came up with a Flintstones-to-Jetsons analogy at the get-go, essentially asking the client to rank the project’s innovativeness on a scale that went from a “Flintstones”-era traditional design to a “Jetsons”-era future-thinking design. “At the beginning, we asked them to plot where they were, and they were closer to the Flintstones,” Michiels said. “We kept using that as a measure throughout the project, asking them if we were getting closer to the Jetsons.”

In the end, even the Jetsons themselves would have been impressed with the innovations involved in the center. For instance, the school wanted an open design — more similar to that of a contemporary office — that broke away from the traditional walling off of students in designated classrooms. Even the teachers opted to do away with assigned desks in an effort to allow for more observation and idea sharing.

Michiels said that the teachers and staff were excited that the design would allow kids to be more self-directed because these particular students need access to spaces and tools that are unavailable in a traditional classroom. That includes space for flying drones, teaching students coding skills, a student-run green screen broadcast studio as well as a maker lab.

“It’s a very open-minded program,” Michiels said. “If teachers are giving instructions, they’re generally giving a framework to operate within, not necessarily saying that the students ‘have to do it’ this way, so we wanted the space to serve as a framework that could guide activities without being overly prescriptive about it.”

Two key design elements were flexibility and visual access. At SAGE, students only spend 5 percent of their time listening to lectures, while the rest of the time is split between doing project-based learning, collaborative group studies and independent studies — all of which require a wide range of learning environments. Wide stairwells create space for chance encounters, while an outdoor patio gives students the chance to learn in an open-air environment. Miniature grandstand seating, built-in nooks and flexible furniture only add to the flexibility.

The school also wanted to encourage curiosity in its students, so the design team used an open layout to create visual access for students to see what other students, older or younger, are doing as well as to see the trees and ravine outside, connecting them to nature. It also wanted the space itself to be a teaching tool, according to Michiels. “We wanted students to wonder what a material is or see something out the window that can be used in a science project,” she said. “We often questioned if we could frame things in a different way for the students that led us to creating a lot of flexibility and visual access.”