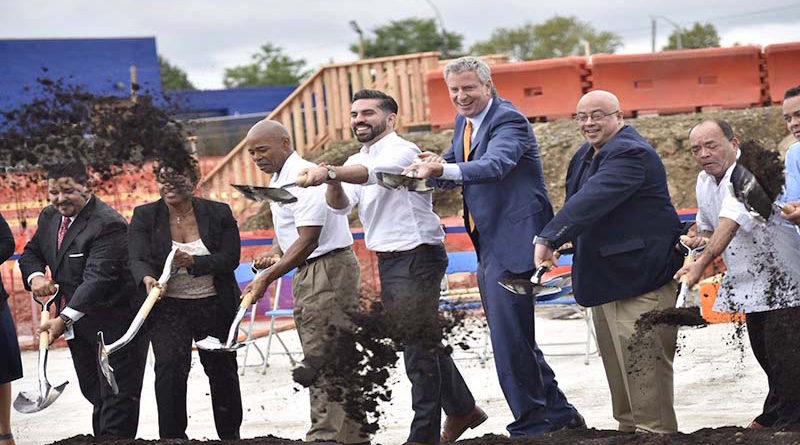 “For too long in our city, developers wrote the rules while government stood on the sidelines and caused working people to become displaced and many neighborhoods to go underserved,” said Mayor Bill de Blasio. “We believe every zip code deserves high-quality education and are proud to deliver on our promise to the people of East New York with this new state of the art school, which will provide enough seats for future generations to come.”

The NYC school system is the largest school district in the U.S., with over 1.1 million students currently enrolled across the city’s five boroughs: Brooklyn, the Bronx, Manhattan, Queens, and Staten Island. Brooklyn boasts the largest student enrollment across all five boroughs, with a total of 342,622 students reported in the 2017-2018 school year. As of September 2017 there were reportedly 1,843 schools within the city’s Department of Education.

Located at 3269 Atlantic Avenue, the building will be fully ADA-accessible and will include two state-of-the-art science labs, a gymnasium and two exercise rooms, occupational therapy and physical therapy spaces, two art rooms, a music room with sound-proof practice space, a 1,000-square-foot rooftop greenhouse, funded by Council Member Espinal, and a school yard with a basketball court, play equipment, and benches and trees. The playground will reportedly be open to the public during non-school hours.

“This new state-of-the-art-building will be a remarkable asset to Brooklyn students and families,” said Schools Chancellor Richard A. Carranza. “I thank our partners for their collaboration, and look forward to seeing students here in just two years. We’re continuing to invest in high-quality schools and school buildings that give students the resources and opportunities they need to succeed.”

The new school construction is due in part to the East New York Neighborhood Plan, a comprehensive plan designed to promote affordable housing and economic development. The plan was developed through a years-long, robust community planning process which involved close collaboration with residents, stakeholders and elected officials — and that commits $267 million in capital projects and services for East New York residents.

The elementary and middle school is among the most important commitments made to the East New York community as part of the plan, which was adopted by the City Council in 2016. According to the plan, construction of the new 1,000-seat school will alleviate school overcrowding and provide for a growing population.

“This new state-of-the-art school building will bring excitement and vibrancy to all students who come through these doors,” said Lorraine Grillo, President and CEO of the NYC School Construction Authority. “This new space will include all the amenities we expect in a world class educational facility and we are proud to be bringing this school to East New York.”