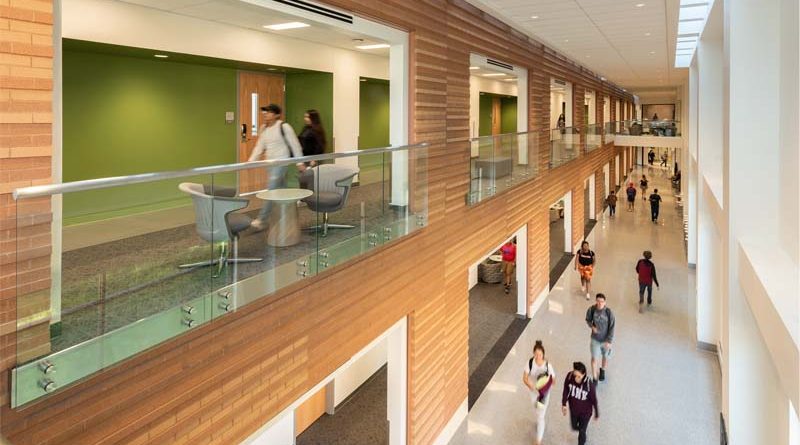 GRAYSLAKE,Ill. ­— The College of Lake County (CLC) recently announced that its Science & Engineering Building has achieved LEED Platinum, the highest level of certification achievable with the Leadership in Energy and Environmental Design rating system.

The 42,000-square-foot Science & Engineering Building, which opened in January 2018 at the college’s Grayslake Campus, houses mechatronics, photonics and chemistry classrooms and laboratories. Among its sustainable features are photovoltaic solar panels, green roofs of planted vegetation, a geothermal heating and cooling system and energy efficient fume hoods in chemistry labs, according to David Husemoller, CLC sustainability manager. Other features include LED lighting, and daylight harvesting, in which generous window space in each room gathers natural light, reducing the need for electrical lighting.

“We are honored to earn LEED Platinum certification,” said CLC President Lori Suddick. “As CLC’s first LEED Platinum building, the Science & Engineering Building embodies the college’s commitment to and integration of environmental, economic and social sustainability in its operations and academic programs. The building serves as a living laboratory, inspiring students to learn sustainability practices they can use in their future career fields.”

The Science & Engineering Building is designed to reduce building energy use by 66 percent compared to a standard science building of similar size, Husemoller said. The building’s rainwater recovery system collects rain in an underground tank and uses it for flushing of toilets and urinals, reducing potable water use by 41 percent.

Before construction, Affiliated Engineers Inc. (AEI) did an energy model that assessed energy conservation measures and their impact on annual energy use and cost. One result of that study is the south façade with its large windows that provide the appropriate amount of daylight into the labs.

The entire building and most of its interior were analyzed to optimize daylighting, reduce glare, and improve thermal performance. The most interesting and not so obvious element is the self-shading façade concept developed by Legat as early as 2008. The shading solution uses extended mullion caps to control light, heat, and glare at virtually no additional cost, and helps fill the academic spaces with an abundance of natural light.

The team recognized that, in order to attain LEED Platinum for a lab building, an east/west orientation was a must to respond to the sun’s seasonal changes in elevation. When the sun is higher in summer, the exterior shades above the windows act like visors and prevent sunlight from hitting windows to reduce solar heat gain. In winter, labs get solar heat gain because the lower sun shines beneath the shades.

Legat’s Jeffrey Sronkoski, principal and director of higher education, said, “From the very onset of the project, the college’s leaders were intent on making the Science and Engineering Building a model of sustainability. Not only did they accomplish their objective, but they also showed that achieving LEED Platinum for science buildings is no longer the holy grail it once was.”