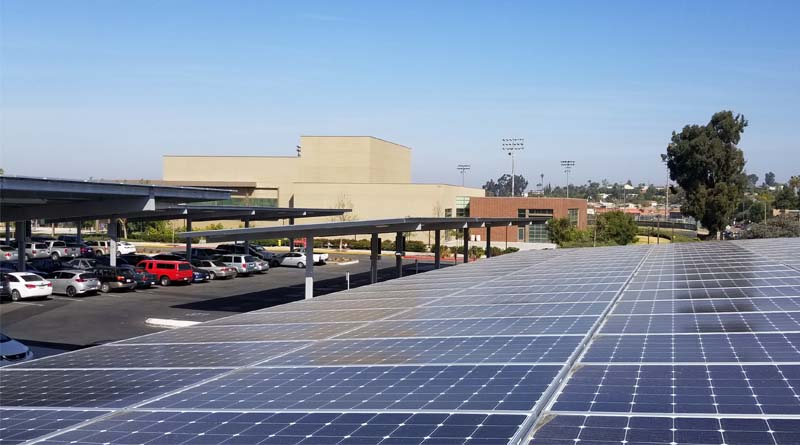 Nationwide 4.4 percent of schools have a solar installation and nearly 3.9 million students attend one of these schools, according to the latest report from the Solar Foundation. Since 2014, the amount of solar installed at schools has nearly doubled, totaling 910 megawatts (MWs) of capacity across 5,489 K-12 schools in the United States. This growth demonstrates increasing engagement in the massive potential solar has to help schools save on energy bills, reduce overhead costs and free up cash in annual operating budgets.

But for schools, going solar means more than just money saved. In addition to economic benefits, solar enables a range of educational and social opportunities for the school and surrounding community.

First though, because they are significant and typically the initial selling point, it’s important to explore the economic benefits that schools can expect from solar. Reducing energy costs is the main bullet point in a school’s argument to go solar. Whether a school decides to put solar on its buildings to consume directly, off-set its electricity use with clean energy through virtual net metering or community solar or do a combination of the two – the school should anticipate a significant reduction in energy costs, either by directly consuming the power its systems produce, or by selling the solar power to the grid to cancel out some of its costs. To give a recent example, Pine River-Backus and Pequot Lakes school districts in Minnesota announced that its initial savings estimates of $20,000 – $25,000 a year were conservative for its 1.5 MW portfolio of on-site solar systems.

The stabilization of energy prices over time is another major bonus. Now that school systems are able to sign power purchase agreements (PPAs), or energy contracts with a developer, schools have the opportunity to not only deflect most or all of the upfront costs of installing a solar system, they can also lock in energy prices through long-term contracts for up to 15-20 years at a time, avoiding volatility in retail prices over time. Through a PPA, the school pays the developer or independent power producer for energy consumed, at a rate that’s typically less than what a utility would charge. The developer funds the solar system based on those revenues and can monetize federal tax credits, while the school skirts upfront costs and pays a reduced and reliable electrical bill. Schools considering a PPA should work with an experienced independent power producer that will also take care of system design, finance and long-term operation.

Both cost savings and stability equate to significant benefits effecting a school’s bottom line. The U.S. Department of Energy’s EnergySmart Schools report shows that, at more than $8 billion spent each year, energy costs represent the highest expense for K-12 schools, after personnel costs. Because schools typically operate under fixed budgets, cutting energy costs can free up space in the budget for more teachers, educational materials, extracurricular programs and more.

But direct economic benefits aren’t the only important advantages for schools to consider. These days, it’s hard to find an educational institution without students that are advocating for pro-environmental action, whether to elected officials for policy changes or to school leaders for implementation. It’s clear that sustainability is a priority for students, from the east to the west, and from the elementary to university level. Solar gives schools a way to take action toward their students’ values while securing a strong differentiator. For students and guardians making decisions about schools, solar can set apart schools that show credible commitment to renewable energy and green values from those that don’t.

Additionally, solar offers schools endless on-site career-prep and training opportunities for students at every grade and income level. During construction, schools have the unique chance to invite developers, contractors, financiers, engineers and even marketeers to the classroom to give guest lectures or discuss career paths, creating visibility and networking advantages in one of the fastest growing job industries in the United States. The National Solar Jobs Census shows that solar jobs will increase 7 percent in 2019, bringing the total to 259,400 jobs. What’s more, career prep programs like these can appeal to the increasing number of students considering trade schools or programs that prioritize hands-on learning.

Some schools have teamed up with their developer to design solar curriculum and class projects to accompany new solar systems. Other schools have turned the operations and maintenance of their solar systems into class projects or student jobs by asking students to monitor kilowatt hours produced and calculate carbon emissions deflected. St. Olaf College in Minnesota designed a semester long class, co-taught by an Environmental Studies professor and the school’s Facility Manager, to accompany a new solar array. Students in the class learned how to use Helioscope, a solar design software, to design the school’s new solar system, and then were invited to stay on campus as summer interns to work with contractors to oversee and support the construction of their designs.

Solar systems also offer unique points of engagement for outside community members. Schools can work with their developers to set up on-site kiosks during construction to talk about solar energy to passersby and informational webpages dedicated to sharing project updates and monitoring energy output. By partnering with developers that offer long-term operations and maintenance, schools can establish collaborative, creative programs to increase awareness, like constructing school gardens near ground-mount systems, offering a chance for students and community to regularly harvest crops and learn about solar energy. Take Susquehanna University’s Center for Environmental Education and Research for a creative example – the university uses its ground mount solar array to produce 30 percent of its campus’ energy needs and uses the 14-acres of grass beneath it to feed the college’s herd of sheep.

The number and variety of benefits that solar creates for schools begs the question – Why aren’t there more solar systems on schools? “Going solar” is an easy statement to make, but implementing projects involves collaborative decision making between school officials and the solar experts they trust to build the assets. Schools looking to add solar to their mix of energy resources can start the process by understanding how much energy their buildings consume, how their electric bills are paid, where their electrical meters are located and who would be part of the decision-making process. Most importantly, they should work with an independent power producer that has the experience and resources necessary to not only simplify the process, but also find creative ways to help its school partner go beyond maximizing economic returns and optimize new educational and engagement opportunities.

Schools are going solar to not only save on operational costs, but also to increase climate resiliency of educational institutions, provide new learning opportunities in critical, in-demand STEM subjects and build awareness of renewable energy in surrounding communities. Already, schools that have gone solar are offsetting about 1 million metric tons of carbon dioxide per year. Just imagine how more solar on schools could reduce carbon emissions and advance the renewable economy, all while empowering future leaders to be part of a meaningful, emerging industry.

Jonathan Roberts serves as VP of Midwest Development at Soltage.