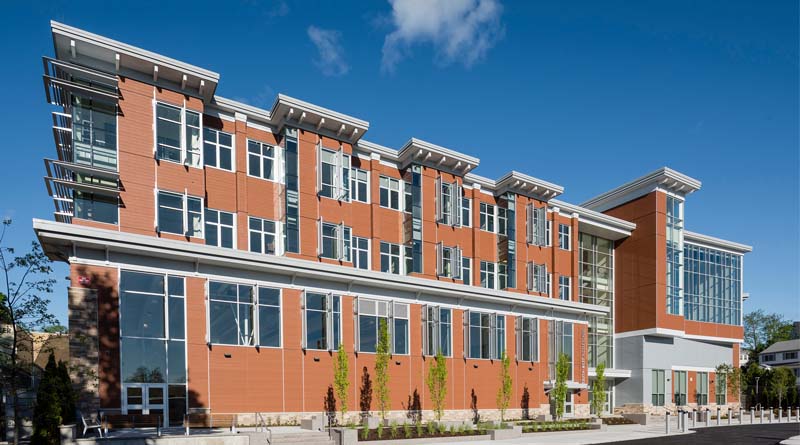 QUINCY, Mass.— Calling it a “building of hope,” city leaders in Quincy celebrated the completion of its newest school, the South-West Middle School, a $58 million 96,000-square-foot facility that will usher in the next generation of learning. BOND, the Northeast’s premier building, civil, utility and energy construction firm, built the new school on time and on budget and celebrated the milestone alongside community members, students and school officials.

During the course of the two-year project, BOND developed phasing and logistic plans, constructability analyses, proposed value engineering alternatives to maintain the project budget, and then constructed the new building just a few feet away from the Sterling Middle School, the occupied building being replaced.

“We’re extremely proud of this important milestone at South-West Middle School,” said Frank Hayes, COO and President of BOND’s Building Division. “The complexity of this type of building working alongside a fully-occupied school allowed us to think strategically at every step of the project.”

New safety enhancements were built into the facility including glass walls electrified with a film that turns the glass opaque with the flip of a switch – making it impossible to see who is inside the classroom – an added safety measure in the event of a lockdown.

“Building off the growing trend of innovative and modernized schools, the light-filled spaces and technology-rich classrooms allow this new building to facilitate a high-quality of student engagement for the next generation of learning,” said Robert Murray, BOND President.

“We love to build these facilities, because we really see what happens in them,” said Ken Johnson, VP Education, BOND. “The speed, the new way that teachers are going to be able to teach, the opportunities for them to create, I think is tremendous. It gives us a great deal of satisfaction to be able to contribute to that, and to know that we’ve helped make a difference in these students’ lives and in the community.”

Since 1907, BOND has managed many of the Northeast’s most complex construction projects. BOND operates as a construction manager for academic, healthcare and life science clients and a self-performing general contractor for the power and energy industry.