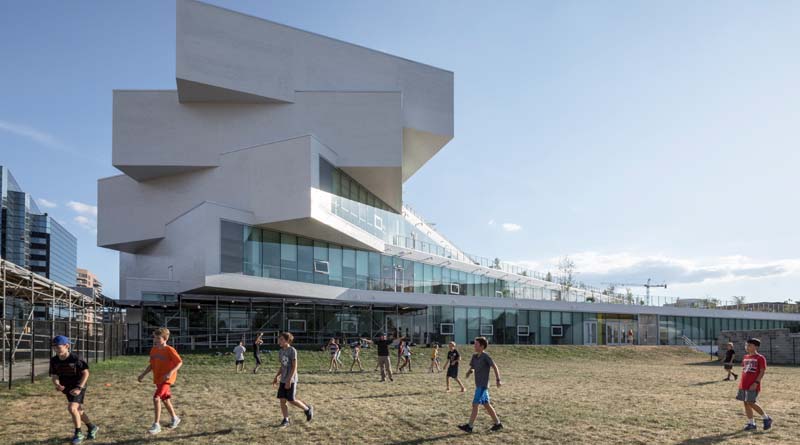 “The Heights creates a new architectural icon in Northern Virginia and one of the most innovative educational facilities ever built,” explained Tim Duffy, vice president and director of technical services with Leo A Daly.

“Learning and community are infused into every detail—from its twisting geometry to the bespoke learning environments that support students in their educational journey.”

The team successfully maximized density and open space on the constrained site. Five levels of classrooms are rotated around a central pivot point, creating rooftop terraces on each level that serve as outdoor educational environments. A cascading central stair stitches the five levels together, creating a sense of connectivity and community that is rare in midrise school buildings.

A lobby and gathering space, theater and gymnasium are located on the ground floor, occupying spaces of varying heights created by the rotation of the classroom bars. Public areas are accessible from the main street along Wilson Boulevard.

Additionally, four rooftop terraces are accessible directly from classrooms on levels two through five. Each terrace provides a different scale of activity, from large gatherings to class discussions and quiet study areas. The four terraces are designed to reflect the major ecosystems of the Mid-Atlantic physiographic regions and are landscaped with native plants and tree species through an intensive green roof system.

Leo A Daly and BIG worked closely with structural engineering firm Robert Silman Associates to execute the building’s many gravity-defying cantilevers. A system of trusses transfers building loads at each level, while avoiding the need to have columns in classrooms or other large program areas, such as the gym and theater. A careful erection sequence was carried out in phases to build the complicated structure.

The project was designed in response to the rapid densification currently underway in the Rosslyn business district. As part of the West Rosslyn Area Plan (WRAP), the Heights contributes to an urban mixed-use corridor defined by civic-minded public spaces and a blend of retail, office and residential uses.

The Heights supports the learning needs of two unique APS programs housed there: H-B Woodlawn and the Stratford Program.

Based on the liberal education movements on the 1960s and 1970s, H-B Woodlawn empowers students from grades 6 through 12 to direct their own courses of study and engage directly in administrative matters. The space was designed more like a university campus than a typical high school.

The Eunice Shriver Kennedy Program—which serves special-needs students aged 11 to 22— occupies two levels within a dedicated wing of the building. Many Shriver Program students use wheelchairs and have sensory and motor disabilities that require the help of a personal companion during the day. The curriculum is individualized to each student and focuses on vocational and community skills such as daily living, communication, leisure, recreation and other skills that help with independence.

The density of the building’s program also required a careful approach to acoustical design. Spaces with the greatest potential for noise bleed—such as gyms and theaters—are located on the ground floor. Other spaces, such as music rehearsal rooms, have isolated floor slabs and suspended ceilings to buffer them from surrounding classrooms. The large auditorium uses conditioned air supplied through an underfloor plenum, achieving isolation from the adjacent mechanical room.