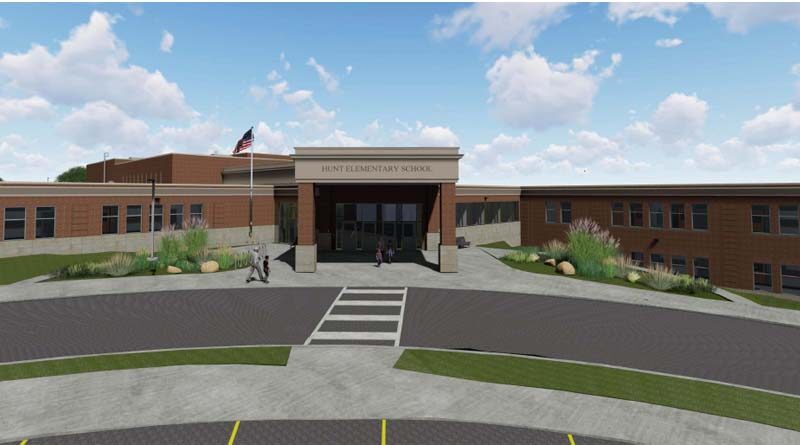 The new K-5 school is being built on the site of the old Hunt School that was demolished in mid-2019. The original Hunt School was named for Dr. Andrew Hunt, a physician and dentist who was the first president of the Sioux City School Board, which opened in the midtown area in 1906. It closed after 113 years and was—by far—the oldest school in the public system.

While the new Hunt school is under construction, neighborhood elementary students are attending classes in the former Crescent Park Elementary School.

“FEH has incorporated a very timeless and historic looking exterior design to Hunt Elementary that we find to be extremely complimentary to the history of the neighborhood,” said District Director of Operations and Maintenance Brian Fahrendholz.

Hunt School is considered a specialty school similar to others in the district. Hunt will be home to the A-plus curriculum placing emphasis on the arts and music throughout the core curriculum.

“There will be some unique design elements,” Fahrendholz added.

Some of these elements include an upgraded lighting system and raised band room that can function as a stage adjoining the gymnasium allowing for simple theatrical performances. Other elements include multiple display areas, an art gallery and a classroom outfitted as a black box, which is a relatively recent innovation in the theater world, in which a simple performance can be held in a room with black walls.

The new building will also feature the salvaged terra cotta entrance structure from the demolished building inside the new dining commons as a reminder of the past.