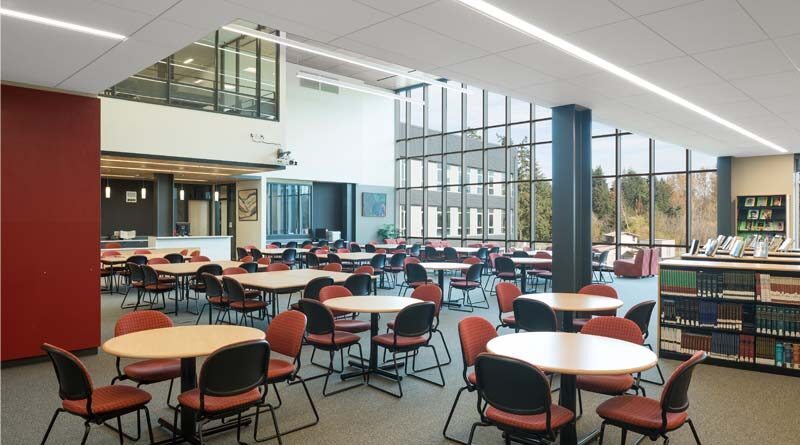 Whether starting the academic year virtually or in person, school districts actively are evaluating their facilities with a new emphasis on creating productive educational spaces and experiences. Optimizing acoustics plays an essential role in supporting student achievement and promoting an inclusive learning environment.

Up to one of every four words cannot be understood by students in many classrooms, according to the Acoustical Society of America. When students cannot hear their teachers, they struggle to stay focused, to understand lessons and to perform well on tests. For every 10-decibel increase in noise, students perform 5.5 points lower on their national standardized tests. For students with hearing impairments, learning disabilities or who speak English as a second language, these listening challenges are augmented.

In noisy and reverberant classrooms, teachers must raise their voices causing extra vocal strain and stress, which can lead to irritability, distraction and dissatisfaction in their work. With greater awareness of the impact noise has on teachers and students, more districts are requiring optimal acoustics.

Sound travels in outwardly radiating spherical waves. Direct sound travels from the sound source, such as a teacher’s voice, directly to the students’ ears. This is typically the most intelligible because it is the loudest and clearest. Other sound waves veer in different directions and reflect off surfaces before being heard. Inside an enclosed room, if they reflect around long enough, the sounds waves are known as reverberation.

Reverberation makes it difficult to differentiate words such as fifty and fifteen. To avoid problems associated with excessive reverberation in learning spaces, ANSI/ASA S12.60 Acoustical Performance Criteria, Design Requirements, and Guidelines for Schools specifies that a reverberation time of 0.60 seconds is a minimum performance requirement and that classrooms should be readily adaptable to achieve no greater than 0.30 seconds.

Commonly abbreviated NRC, a Noise Reduction Coefficient is a single number value ranging from 0.0-1.05 that describes the average sound absorption performance of a material. As another example, Green Globes requires that the NRC of ceilings in classrooms be 0.80 or higher. To achieve the preferred 0.30 second reverberation time requirement in ANSI/S12.60, the acoustic ceiling would need an NRC of 0.90 or higher, assuming there is no other sound absorption on the walls or floors.

No other room surface is as large and exposed to the sound waves reflecting around the room than is the ceiling. Ceilings with a high NRC absorb sound, ultimately improving speech intelligibility and acoustic comfort, allowing students and teachers to better understand one another.

Some smooth, white, acoustic ceiling panels may look very similar, but they can vary in acoustic performance by as much as 50%. Ceiling panels made of stone wool are inherently highly sound-absorptive due to their complex, three-dimensional fiber structure. In addition to high sound absorption, stone wool resists moisture and sagging, and offers Class A fire performance.

Peoria Public School District in Illinois replaces nearly 140,000 square feet of acoustic ceiling panels each year, according to Mick Willis, CFO. This is equivalent to replacing the ceilings in one or two schools annually. By reducing the need for repair and replacement, the district would save $280,000-$560,000 for every year it extends the lifespan of its ceiling panels. This not only minimizes school facility costs, but also maximizes taxpayers’ dollars and districts’ budgets.

Throughout a school district’s buildings, there are more than classrooms. Gyms, auditoriums, cafeterias, media centers, offices, recording and broadcast studios, industrial shops and band rehearsal rooms all play their part in the education process. Each of these spaces has a different function and, therefore, different acoustical needs.

The rooms and spaces inside an educational facility can be categorized by their core acoustic function: speech, focus, activity or music.

Optimizing acoustics to the function of each learning space within a school creates a more positive, inclusive and productive experience for students and teachers, and allows school districts to provide a better return on investment for their community.

Gary Madaras, PhD, is an acoustics specialist at Rockfon. He helps school district leaders, facility managers, designers and specifiers learn the optimized acoustics design approach and apply it correctly to their projects. He is a member of the Acoustical Society of America (ASA), the Canadian Acoustical Association (CAA), and the Institute of Noise Control Engineering (INCE).