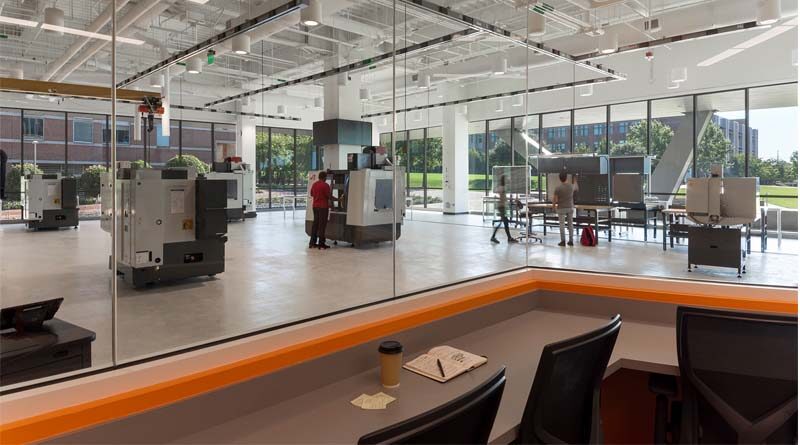 RALEIGH—The Fitts-Wollard Hall has thrown open its doors to students following a collaboration between North Carolina State University and Clark Nexsen, who acted as both the architect and engineer on the project. The $150 million, 225,000-square-foot engineering building sits on the college’s Centennial Campus, which is largely devoted to scientific research.

Fitts-Wollard Hall represents the latest iteration in the college’s Think and Do campaign, meant to marry prominent ideas with practical execution. Accordingly, the new building is meant to showcase “engineering on display” via extensive glass windows allowing more sunlight to penetrate the interior of the four-story building. Entry lobbies at the south and north ends of the building are connected to one another via open corridors that allow passersby to peer directly into the engineering labs.

The Fitts-Woolard Hall represents the first time NC State has utilized a public-private partnership to underwrite constructing an academic building. Half of the funding came from a 2016 bond referendum and the rest from private donors—the most prominent of whom were alumni Edward P. Fitts Jr. and Edgar S. Woolard Jr., whose $25M joint gift was recognized with naming rights.

Flanking the engineering building’s south entry are a structural testing lab, senior student project space and large-scale driving simulator, all of which are visible as people walk through the building. The building’s educational spaces and openly visible structural engineering elements are meant to inspire students and educators to look to the future at tomorrow’s challenges.

“The concept of engineering on display takes the work being done inside the building and celebrates it by making it visible,” Clark Nexsen principal Shann Rushing said of this paradigm. “You get a visual connection to the research and instruction happening in the building.

“The steel-plated monumental stairs have an exposed truss design that is structurally expressive,” Rushing added. “The stairs weave upward alongside a feature wall designed to reflect the diverse engineering studies housed in the building. The form of the stairs also creates a variety of gathering and collaboration spaces.”

Fitts-Woolard Hall will bring together under one roof the Department of Civil, Construction, and Environmental Engineering and the Fitts Department of Industrial and System Engineering. The hall will offer 100 classrooms and laboratories. Additionally, teaching and research spaces in the building will support global tech firms in sectors including manufacturing, robotics and sensor technology, transportation and logistics, and bioengineering. On the second floor, an open area known as the “hearth” will allow for student-faculty interaction.

The engineering building’s campus neighbor is the James B. Hunt Jr. Library, designed by Clark Nexsen and Snøhetta.