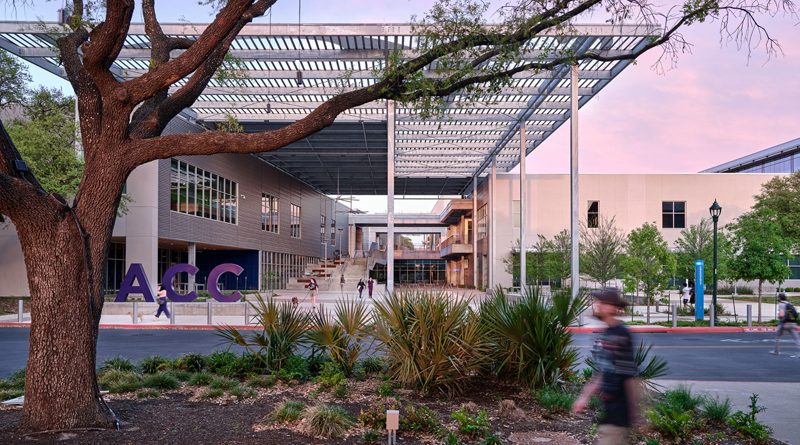 The venue’s eco-friendly elements include use of recycled material, solar panels and light-colored paving and roofing to refract as much heat as possible, among others. Photo Credit: Courtesy of Dror Baldinger, FAIA

AUSTIN—The newest kid on the block for the Austin Community College (ACC) District, known as Highland Phase 2, has been recognized with LEED Gold certification by the U.S. Green Building Council for its efforts to lessen waste and increase the campus’s energy efficiency.

As part of the award, the U.S. Green Building Council took note of Highland Phase 2’s use of recycled material and reusing 58 percent of the original structure that was previously on the site.  Other sustainable elements achieved at the site include 200kW solar panels, light-colored paving and roofing to refract as much heat as possible, as well as plumbing features that are meant to reduce wastefulness.

For Highland Phase 2 ACC chose Barnes Gromatzky Kosarek Architects (BGKA) as lead designers and architect of record.  That firm, based in Austin, worked with Perkins & Will, whose purview entailed both architecture work as well as consultation on interior designs.  Together the firms started out by assessing what material could be salvaged from the interior before the redesign commenced.

Another sustainability element at Highland Phase 2 is the chilled beam HVAC system, a recirculation system that uses water to maintain a comfortable indoor temperature.  The slow-moving air makes the HVAC system easier to maintain, saves energy and also reduces background noise for music classes and recording taking place in the building.

Highland Phase 2 is the third campus within the ACC network to earn the designation of LEED Gold certification.  Three other campuses under the college’s umbrella have earned LEED Silver certification.

“ACC remains committed to reducing our carbon footprint and becoming a leader in sustainability efforts,” Andy Kim, ACC’s energy and sustainability director, said recently.  “LEED certification is internationally known.  I am proud of the work ACC continues to do to protect the environment and reduce costs through energy efficiency, waste reduction, and water-saving efforts.”

The architectural design salvaged as many older materials as possible from the former mall’s storefront facades, including glass that was repurposed.

“The steel removed in the cutting out of the paseo was painted black to indicate that it was repurposed and was used within the mixing areas to frame special jewel boxes designed for student interaction,” BGKA said in a statement about its work at the campus.  “Additional items salvaged included a 1970’s neon camera sign that is at the entry to the new photography lab and the fiberglass larger-than-life banana split connected to the entry toward culinary arts.”

Austin Community College educates more than 70,000 students per year.  ACC, which currently diverts more than half of its landfill waste, aims to have no campus waste by 2040 and be entirely climate-neutral by 2050.