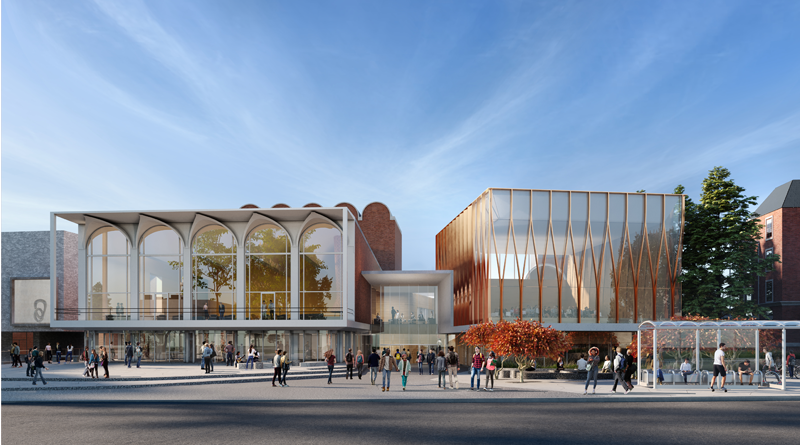 DARTMOUTH, N.H.—Dartmouth College is planning to expand and modernize its Hopkins Center for the Arts, known around campus as “the Hop.”

The Hop is located on the campus’s Green and serves as the gateway to the campus’s Arts District. New areas of the Hop will entail performance and practice spaces, digital and broadcasting capabilities, interactive teaching elements, and musical production space.

Architecture firm Snøhetta was tasked with respecting the original design by Wallace K. Harrison while simultaneously upgrading the building. Accordingly, Snøhetta’s design entailed extending the Hop’s reach such that the new elements blend in with the surrounding campus and the classic feel of this New England town. Snøhetta is applying what the firm calls a “combination of the rugged and refined” so the Hop honors both the manmade elements of the campus as well as the surrounding mountains. The architects are working so that the external plaza makes use of the building’s “gracious curves” so as to more naturally move people as they approach the structure. The plaza will also serve as an outdoor meeting space.

Inside, the new lobby, called the Forum, is meant to act as a communal space for people to gather before and after various performances. A stairwell in the Forum links it to the second-floor Recital Hall and Performance Lab. Snøhetta designed the Recital Hall to resemble a glass-enclosed lantern, and it offers external views of the nearby campus buildings thanks to its “curved mullion system” in place. Snøhetta is also renovating the Hop’s 900-seat theater, Spaulding Auditorium, as well as Top of the Hop, a rooftop space used by students and faculty alike.

Snøhetta is working with construction manager Consigli on the renovation, which is projected to commence later this year and be completed sometime in 2025.  The Hop will remain open as the renovations are underway.

Craig Dykers, a founding partner of Snøhetta, said that the audiences are as much a part of the creative process as artists themselves, and therefore it was crucial to join them together as one in the Hop’s performance spaces.

“We are excited to expand the Hop’s pioneering legacy as a venue for emerging forms of artistic collaboration and creative expression by bringing new rehearsal and production spaces to the building, ensuring continued support for a variety of perspectives and ways of making,” he said.

In a subsequent statement emailed to School Construction News, Snøhetta said that it was crucial to bring the Hop, a revered Dartmouth mainstay, into the 21st century.

“Gathering in-person to experience and learn about the Arts is fundamental to enjoying life and especially meaningful in the context of all the difficulties the world is facing right now,” their statement said. “The revitalized Hop will advance Dartmouth’s mission and enhance opportunities for artistic exploration and growth, inspiring students, faculty, staff, alumni, and visitors from around the world.”

The email continued: “Adding onto an existing building is always a challenge, given unknowns and deciding how to best allocate project resources, but the original design and spirit of the Hop are strong and provide a robust foundation for the Hop to continue to thrive.”