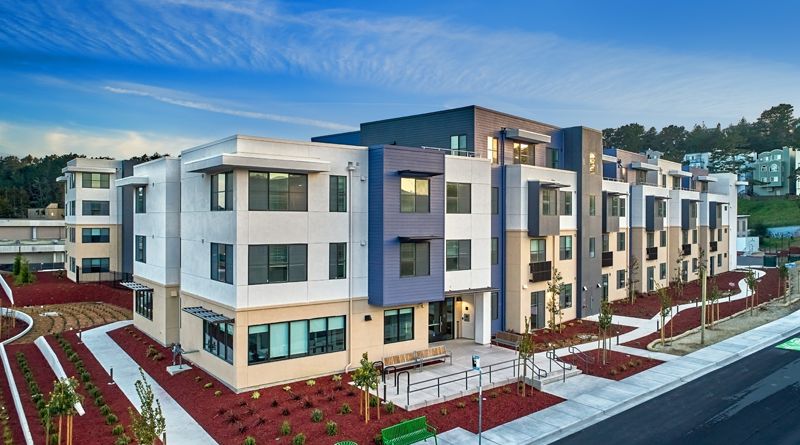 705 Serramonte is made up of 122 apartments in total, ranging from one- to three-bedroom homes between 560 feet and just over 1,000 square feet. Photo Credit: SVA Architects

Completed in time for JUHSD’s Centennial Celebration, the $75 million 705 Serramonte was funded partially by funds set aside for affordable housing for the district’s educators. That bond provided $33 million thanks to Measure J, passed by voters in June 2018.

705 Serramonte is made up of 122 apartments in total, ranging from one- to three-bedroom homes of between 560 and just over 1,000 square feet. Each unit features stainless steel appliances, vinyl plank flooring and extensive windows to allow in ample sunlight—even in the cloud-prone Bay Area. The rental prices are specifically set at 50 percent of the local market rate so as to be as affordable as possible for the occupying educators.

In addition to the liveable units themselves, the new development features a fitness center, community lounge, barbecue area and a landscaped courtyard that offers children’s play equipment.

After a May ribbon-cutting official opening ceremony, JUHSD personnel have been gradually moving into 705 Serramonte over the course of the summer months.

Nathan Herrero, principal at SVA Architects, said that it was the designer’s goal that the apartments at 705 Serramonte provide JUHSD’s educators with luxurious living at a reasonable price.

“Along with the District, we wanted to honor the critical work of educators by offering comfortable spaces that feel like a haven at the end of the day,” Herrero said.

Added Mohammad Hakimi, J.H. Fitzmaurice’s president and CEO: “Many districts around the country are already looking to JUHSD as a model for this type of educator housing in their own communities.”

In a follow-up statement to School Construction News, Hakimi said that the contractor had to tackle the ongoing challenges of the shattered supply chain. This included being creative when it came to sourcing materials for insulation, roofing, cabinetry and flooring.

“In anticipation of the uncertainty of the lumber market, the Project Team proposed and elected to change the Framing System from Wood/Lumber to Light Gauge Steel Framing,” he explained, adding that this choice resulted “in better construction quality and not being impacted by framing material availability.”

J.H. Fitzmaurice, Inc. was founded in 1922, and has been a mainstay of Bay Area construction work for the last century—and still operates out of the same location in Oakland it did at the time of its founding.

Designer SVA Architects’ other education-focused projects include the CHPS Verified Leader School La Escuelita Educational Center in Oakland. Based in Southern California, the architect works throughout the Golden State, with two Northern California offices in Oakland and Davis.