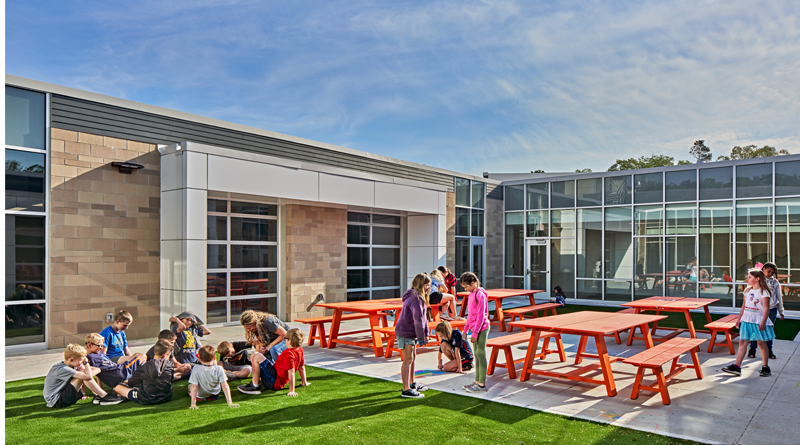 LUDINGTON, Mich.—GMB Architecture + Engineering has debuted the Ludington Elementary School, effectively consolidating three half-century-old school buildings into one facility for Ludington Schools. The district decided ultimately that given the age of the schools, as well as the cost involved, to choose this path rather than renovate the trio of existing facilities.

GMB’s reimagined design features a central spine from which emanate segmented learning environments and subjects in various “wings” at Ludington Elementary for each grade. Their nexuses also encourage the idea that sharing of ideas occurs across grades and age groups. Furthermore, the architectural layout fashioned various learning nooks and areas to coincide with the notion that learning can occur not just in the classroom itself, but theoretically anywhere on campus.

The new Ludington Elementary encompasses 154,820 square feet of educational space—all of which is considered by the designers to be “extended learning” areas. The design by GMB also focused on safety, allowing for easy access and expedited egress. Keyless entry also provides an added security feature.

Each wing of the new school offers quick exit to the outdoors spaces, and the exterior features an extensive playground as well as surrounding woodlands. Because the grounds nearby the school contain a historic Native American burial ground, the designers and school personnel saw a chance to connect the modern school to the area’s pre-Columbian era. Accordingly, each of the wings of Ludington Elementary is named for an animal that was crucial to the lifestyle of the Native Americans who lived in this part of Michigan for thousands of years. These animals include the wolf, the owl and the bear. Furthermore, the surrounding woods are embossed with interpretative signs that impart knowledge about the Native culture in the area.

GMB personnel worked jointly with the Christman Company, who acted as the school project’s construction manager.

In a joint statement emailed to School Construction News about the project, architects Nicole Smith and Thom Danckaert at GMB described the Ludington Elementary work as a “master class” in crafting an educational property that will also be utilized for various other community-related functions in the long term. One particular space that could be employed in such a way is the school’s new gym.

“The gym at Ludington Elementary is two full-sized gymnasiums with a divisible partition in it, allowing for multiple configurations and components that are unique at the elementary school level,” the pair said. “Comparatively speaking, most elementary school gyms are much smaller to be scaled appropriately for the children using them. The new ‘two-station gym’ provides ample space for student and community activities, all in one flexible multi-purpose facility, and allows the school to accommodate two different gym classes simultaneously—a requirement to capture all classes each week.”

GMB employs a stable of architects and engineers from its Michigan hubs at Grand Rapids, Holland and Royal Oak. They also operate out of an office in Indianapolis on projects across the nation.