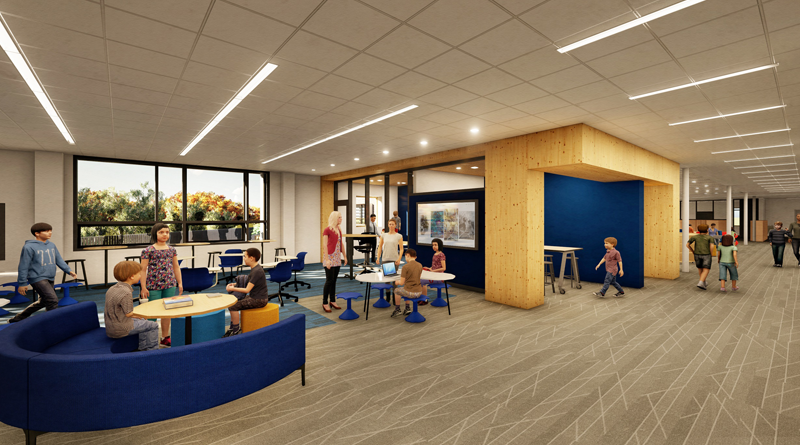 Classrooms at the school are being outfitted with the latest technology and interactive educational capabilities. Photo Credit: Cuningham

VIRGINIA, Minn.—The cold months are descending upon the Upper Midwest, but that doesn’t mean that educational improvements throughout the region necessarily halt.  The Duluth, Minnesota, office of general contractor Kraus-Anderson is working now on the new North Star Elementary School, which will encompass 70,000 square feet of educational space when completed.

North Star was jointly designed by the Cuningham Group and the local Minnesota firm ARI.  The $33.7-million, three-story school will be set up for students in grades 3 through 6, and will live at 411 S. 5th Ave. in the town of Virginia, located approximately 65 miles north of Duluth.  The school will attach to an already existing gymnasium and lobby complex, and its features will include a second-floor outdoor learning patio situated above the school’s main commons.  Classrooms are being outfitted with the latest technology and interactive educational capabilities.

On the exterior, the grounds are being reimagined to include a playground, new parking areas and updated landscaping to help the school transition to its new iteration.

“The school board and Iron Range communities of Eveleth, Gilbert and Virginia have all combined their efforts and finances,” said Patrick Gallagher, senior project manager for Kraus-Anderson.  He added that this marriage of finances will help “provide the best possible facilities to support a modern education experience for their future generations.”

“The major challenge is that we’re tearing into the walls, floors and ceilings to prepare the building to be a modern residential building, revealing decades of unknown modifications and issues that now need to be corrected,” Dan Markham, director of operations with the Duluth office of Kraus-Anderson Construction, said in a subsequent statement to School Construction News.  “In order to keep the project moving forward on schedule, the owner-architect-contractor collaborative process has to [be] very responsive and efficient. We’ve developed a great working [relationship] with AWH Architects, Saturday Properties and our subcontractors to find solutions and implement them as quickly as possible.”

Construction work at North Star is projected to be completed sometime near the end of 2024.  North Star represents just one of many K-12 projects that Kraus-Anderson is engaging on at present, entailing both new construction and renovations.

Kraus-Anderson has been a staple of the Minnesota construction sector since first opening up shop in 1897.  In addition to its headquarters in Minneapolis, Kraus-Anderson operates from Minnesota locations in Duluth, Bemidji and Rochester.  They also have regional locations in Madison and Milwaukee in Wisconsin, as well as an office in Bismarck, North Dakota.

The firm has been ranked number 13 in Building Design and Construction magazine’s list of the top K-12 builders across the country, encompassing over a billion dollars worth of such work in the last half-decade alone.  Kraus-Anderson’s school-related work services entail budget design and facility analysis.