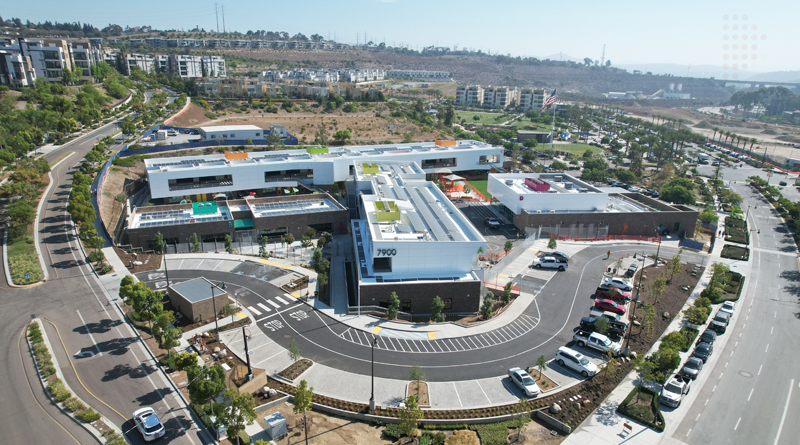 The new school will be host to 500 students and is home to 77,250 square feet of educational space. Photo Credit: Courtesy San Diego Unified School District

MISSION VALLEY, Calif.—The Golden State’s own C.W. Driver Companies has teamed up with San Diego Unified School District to complete the district’s Nipaquay Elementary School, which is named for a Native American village that existed in the San Diego area prior to contact with Europeans. The school’s name translated means “our other home,” and it will indeed serve as a home away from home for students able to make the trip there via public transit or via bike as the school offers several bike racks.

The $58 million Nipaquay Elementary, located in the Mission Valley area, will be host to 500 students in the Civita subdevelopment at its 77,250 square feet of educational space. The K-5 school will offer hybrid indoor-outdoor classrooms, a two-story entryway that will be home to student services, a multipurpose facility, as well as a library and various other student and staff amenities. The school’s dedicated instruction and play areas include Universal Transitional Kindergarten (UTK), as well as modern classrooms for first-grade through fifth-grade students.

The Kumeyaay village of Nipaquay was an important centerpiece of Native trade routes in the area that came to be known later as San Diego following Spanish conquest. A local naming commission agreed on “Nipaquay” as the name for the new school, which was unanimously approved later by the board of education.

“One small step toward restorative justice, this name recognizes and celebrates the long history of indigenous peoples,” Olympia Beltran, a representative for the Kanap Kuahan Coalition and the San Diego Human Relations Commission, said of the choice of nomenclature.

C.W. Driver worked alongside architect domusstudio architecture of San Diego. The contractor broke ground in May 2020, thus entailing a construction timeline of nearly two and a half years. Nipaquay’s grand opening in November was timed to coincide with Native American Heritage Month. The event entailed the presentation of the colors by the Kearny High Army Junior Reserve Officers Training Corps and traditional celebrations from the local Indigenous community.

“We are proud to have created a space that can acknowledge and celebrate the rich history of Mission Valley while paving the way for both educational and community growth,” Sam Myovich, project director with C.W. Driver, said in a recent statement to School Construction News.

“We continue the tradition to recognize our indigenous staff and students year-round,” Dr. Lamont Jackson, superintendent of San Diego Unified, said at the recent unveiling, adding that “for this 32nd annual November Native American Heritage Month, we acknowledge our diverse students and staff who make our school district and Nipaquay Elementary so unique.”

Funding for Nipaquay Elementary was procured through the voter-approved Proposition Z, which was combined with state schools facilities funding.

District Board of Education Trustee Kevin Beiser, who is retiring from the board at the end of the year, said the Nipaquay project represents a fine cap to his years of service.

“Seeing students, parents, teachers, and staff here at Nipaquay reassures me that the future is bright for San Diego Unified,” Beiser said.

Added Michael Goodbody, Nipaquay Elementary’s principal: “Just like the name ‘Nipaquay,’ I hope that this campus feels like a second home for the neighborhood and our students.”