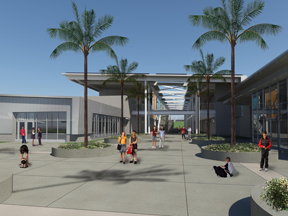 CHULA VISTA, Calif. — While construction has slowed for some districts, the Sweetwater Union High School district is working on nine projects designed to meet LEED Gold certification.
The projects were planned after Proposition O was passed in 2006 to provide $644 million in general obligation bonds for school construction and repair.
In addition to the nine schools planned for LEED Gold certification, designers recently completed plans for a LEED Platinum certified building to replace SUHSD’s Montgomery Middle School.

“Sweetwater Union is the only district west of Ohio that his nine LEED Gold construction projects and one LEED Platinum project in design,” says Jaime Ortiz, a program manager for Proposition O and for SGI Construction Management.

The $22 million project at Montgomery Middle School will involve demolishing existing buildings and constructing a two-story, 16-classroom structure with spaces for a library, counseling center, ASB, and cafeteria. The building will total 45,200 square feet in space.
Proposition O will cover $18 million of the project costs and the remaining funding will likely come from the State School Facility Program. Construction on the new building is scheduled to begin in 2011 and work on interim classrooms is currently under way, Ortiz says.

The new Montgomery Middle School will exceed state energy efficiency standards by almost 40 percent, providing ongoing district savings in the form of lower energy cost, according to reports. Key green features include a rooftop solar photovoltaic system designed to provide 80 percent of the electricity for the school campus.

“The most novel item that we’re including in the project is a thermal displacement ventilation system, which will allow conditioned air in through the floor rather than the ceiling,” Ortiz says.
The displacement system uses less energy because of its design, which allows air to be pushed along at a lower velocity.

The campus will use low-flow restroom fixtures and landscaped bio-swales that will treat storm-water runoff before it is released off site. Landscaping will include drought-resistant native plants, allowing for more efficient irrigation systems. In addition, light-colored roofing and outdoor surfaces will reduce the heat-island effect by reflecting sunlight and heat.

Once complete, the school will have plenty of shaded outdoor spaces, allowing teachers to easily take their classes outside. In addition, indoor architectural spaces will allow for academic displays, allowing teachers and students to connect what they learn in the classroom to what they see in the hallways and corridors.

Each classroom will be equipped with a CO2 sensor, which will monitor the amount of oxygen in each room and adjust air circulation as needed. If teachers and students are not receiving the appropriate amount of oxygen, the sensors will automatically start HVAC systems to allow more fresh air into the room.

Gilbane, Inc. and SGI Construction Management are the project managers for the Montgomery Middle School replacement project. LPA Inc. of Irvine, Calif., is providing architectural and engineering services for the project.

Funds from Proposition O will go toward upgrading a total of 35 middle, high, and adult schools in the Sweetwater Union High School District, providing much-needed improvements to facilities used by 43,000 middle and high school students and 27,000 adult learners district wide.