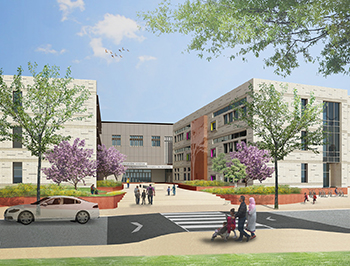 The Boston office of international design firm Perkins Eastman served as the project architect. In a statement on the project, Perkins Eastman Principal and market leader of the firm’s primary and secondary education practice area Sean O’Donnell AIA, LEED AP said, "Perkins Eastman is excited to celebrate this major construction milestone for this innovative community school with the City of Cambridge. We look forward to seeing the schools and the community enjoying its sustainable, high-performance learning environments in the near future."

Aside from providing students with a top quality educational facility, the $95 million Martin Luther King Jr. School was also designed to be a center of its community. The state-of-the-art complex will include a 40-student preschool and engaging community school and afterschool programs for all students. The design includes both a Lower School and an Upper School, serving pre-kindergarten through fifth grade and the sixth through eighth grades respectively. These schools will operate as distinct "neighborhoods" connected by an internal thoroughfare that also offers access to the shared community spaces.

In an effort to extend learning into the surrounding environment, the school will include a City Sprouts garden, outdoor hard and softscape areas, a preschool playground, teacher’s patio and a courtyard garden featuring an indoor/outdoor performance space.

The firm also included a plethora of sustainable features, materials and systems that have put the school on target to achieve Net Zero energy. The building is projected to have an Energy Use Intensity 60 percent less than typical educational buildings in New England and will save energy through proper orientation, pervasive natural light in almost every space and high-performance roof and wall assemblies. The school will also offset energy demands through the use of photovoltaic panels mounted on the roof and south-facing facades, according to a statement by Perkins Eastman.

Speaking with Cambridge Day in June 2013, Deputy City Manager Richard C. Rossi commented on how the school’s sustainability goals will also serve to educate students, teachers and the broader community.

“The whole school community – those who work in the building, as well as the students and the parents – will get a real education about what net zero really means and how we can affect these energy savings,” Rossi said. “This really bodes well for the future as we move along with rebuilding schools in the city. This will be more and more of an important part of that agenda, and good too for the young kids in the school. They’re going to really learn things because they’re going to be part of it. They’re going to see energy savings in how they conduct their daily lives.”

Preliminary work on the school, including a feasibility study, began in early 2012, followed by hazardous material abatement and demolition. The new facility is set to open in time for the 2015-2016 school year.