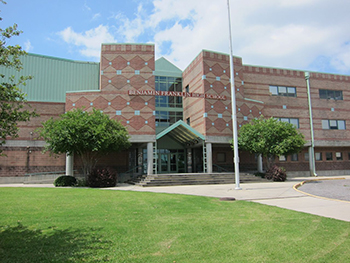 NEW ORLEANS — New Orleans’ Benjamin Franklin High School, a selective charter school adjacent to the University of New Orleans, is known for its educational excellence and national ranking. However, the achievements of Franklin students are not limited to the classroom. Because of the school’s strong focus on service learning, Franklin students are actively involved in community and school projects. One such project was the impetus to achieve one of the school’s long-standing maintenance goals: renovating the restrooms adjacent to the auditorium.
Like many schools in New Orleans, after sustaining damage during Hurricane Katrina Benjamin Franklin High School is still trying to address aspects of the building that were not repaired. Originally built in the 1980s, roughly 50 percent of the school was damaged by floodwaters, which stood for 30 days after the storm.
“In the post Katrina environment, we are one of the few schools within the northern part of the city with an auditorium,” Dr. Timothy Rusnak, Franklin’s CEO and principal, explained. “We always wanted to open our auditorium for community and events from other schools. How the renovations to the restrooms adjacent to the auditorium came about was kismet,”
In 2014 Benjamin Franklin students, led by biology teacher Dr. Mary Gubala, head of the school’s activities program John Parauka and other teachers participated in the U.S. Green Building Council (USGBC) Louisiana Chapter’s Louisiana Green School Challenge. The program aims to educate the public about the benefits of green building and environmental stewardship by participation in hands-on, experiential projects. It operates on the belief that, by getting students involved in sustainable projects, schools can lower operating costs and improve indoor learning spaces while empowering teachers, youth and the community. Benjamin Franklin was one of nine winning schools out of 40 that competed in the challenge.
The school was chosen as the chapter’s first Green School Showcase, through which a mentor worked directly with school to solicit and manage improvement-related donations. Benjamin Franklin’s mentor, Erin Ryerson, an associate at VergesRome Architects of New Orleans and the chair of the Greenbuild Host Committee, was instrumental in directing the renovation. Ryerson coordinated donations from more than a dozen manufacturers of green building products to upgrade the auditorium restrooms.
“Things just came to a sort of confluence. So we were very fortunate,” Rusnak said.
The restroom renovation consisted of structural changes as well as cosmetic improvements. The building contains a completely cement structure and didn’t easily lend itself to construction changes. As such, reworking electric lines and reorganizing some of the plumbing proved to be a challenge.
Sloan Solis flushometers were among the donated products used to make improvements to two bathrooms – increasing both water conservation and energy efficiency. By switching from standard 3.5-gallons per flush (GPF) toilets to 1.6-GPF toilet flushometers, a 54 percent water reduction was realized. Switching from 1.5-GPF urinals to 0.25-GPF urinal flushometers reduced urinal water usage by 83 percent. These efforts helped the high-achieving school, located in one of the city’s more under-resourced districts, become a working model of green building efficiency.
“Getting schools and students involved in environmentally-responsible practices brings plumbing innovation into common practice while reducing water consumption as well as lower operating costs and improve indoor learning spaces,” said Parthiv Amin, vice president of marketing at Sloan.
“We are extremely grateful to Sloan for lending their expertise and providing superb quality,” Rusnak added. “It really has opened the building to not only ourselves, but also become more comfortable and inviting for people in the community – sparking a re-interest, oddly enough, in our theatre program. Thanks to Sloan and everyone else who has helped us, this renovation really helps convey comfort in an environmentally responsive manner.”

Mike Gipson has been product line manager-flushometers at Sloan Valve Company for three years and has 31 years of product management and marketing experience. He can be reached at mike.gipson@sloanvalve.com.