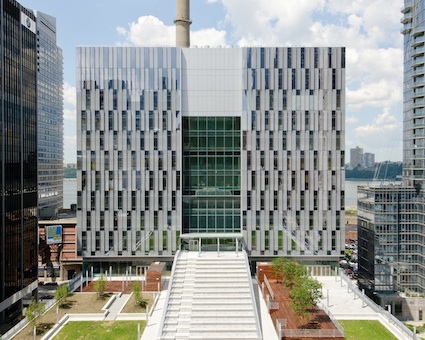 NEW YORK — An unprecedented increase in interest in studying criminal justice prompted the John Jay College of Criminal Justice in New York City to undergo a major expansion that more than doubled the size of its facilities.

“The building is a critical component of John Jay’s transformation into a senior college of the City University of New York (CUNY) system and the greatest expression to date of the college’s continued commitment to ‘educating for justice,’” says John Jay College of Criminal Justice President Jeremy Travis. “It also was built to accommodate our 15,000 students, including 2,000 graduate students. This demand has led to a re-imagining of our core curriculum, development of educational partnerships, targeted increases in faculty hiring, and an emphasis on faculty and student research.”

Architect Skidmore, Owings & Merrill began designing the $600 million project in 2003. Design partner Mustafa K. Abadan said the college wanted an expansion plan that would augment existing facilities and bring unity to the campus as well as opportunities for bridging a vertical campus through interaction and social space.

“The challenge was to stack the functions of an entire college campus — classrooms, laboratories, offices and student amenities — within a single block,” he says. “We worked with CUNY to eliminate traditional ‘department’ floors to maximize flexibility and promote collaboration across disciplines and create a new science quad to provide identity and interaction space.”

Construction manager Turner Construction Co. started site demolition in the summer of 2006 and excavation in February 2007. Work on erecting the tower started in fall 2008.

“The existing site conditions were challenging on this project,” says Turner Project Manager Clarence Crasto. “An active Amtrak railroad had the right of way and was located to the western edge of the existing midtown project site. The construction team had to consider complex foundation, noise and vibration issues as the project was planned and built.”

Due to Amtrak’s right of way, borings were limited once foundation excavation began. Adjustments were made to the foundation as bedrock was found to be deeper than expected.

“This required a redesign of the foundation and approval by Amtrak,” says Crasto. “The team worked closely with Amtrak to approve rigging. At first, we were approved only for weekend work, but through extensive communication and teamwork, we found alternative solutions that allowed for work to resume during the weekdays.”

The 14-floor tower also had its share of challenges. Situated on the western side of the site due to the Amtrak’s right of way presented difficulties in designing the perimeter structure. Turner and structural engineers Leslie Robertson Associates developed a truss system consisting of two vertical truss legs around the elevator/stair cores, which supported a rooftop truss. The perimeter columns from the sixth floor were designed to be hung from the roof truss.

“Erecting the truss system was challenging,” says Crasto. “Thus, the perimeter columns for floors five and down had a traditional W-section column, while floors six and up, which were hung from a rooftop truss, were plates temporarily reinforced by angles to simulate a W-section during erection.” 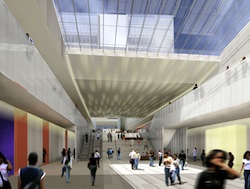 Designed as a modern counterpart to the existing Haaren Hall building — an early 20th-century building facing Tenth Avenue — the new building is clad in glass and aluminum panels, with vertical fins that project from all four sides of the building. The fins are finished with silver-speckled mica flake paint on one side and are silk-screened with a varying pattern of red dots on the other.

“These two treatments on the fins create a dynamic visual effect depending on the direction from which one approaches the building,” explains Abadan. “The spatial compression of the fins as people look and walk west on 59th Street makes the building appear to be reddish, creating a visual effect that ties the new building to the brick façade of Haaren Hall.”

Additionally, the massing of the new building attempts to create a strong urban form, providing the college an identity within the city, he says.

“The building grows from an existing datum established by the height of Haaren Hall’s limestone base and dramatically rises to the west, creating maximum visibility from both Tenth Avenue and the Westside Highway.”

Essentially two components comprise the new building: a low-rise podium with a rooftop outdoor common area and the 14-story tower. A social cascade, which originates on the fifth floor cafeteria in the tower and terminates at the at-grade mid-block student entrance, occupies most of the low-rise podium. Several breakthrough points at the base of the cascade and the rooftop common area provide access to Haaren Hall, allowing direct connection to the new building and creating a unified campus.

The 60,000-square-foot rooftop commons rises four stories above the sidewalk and is anchored by the new building and Haaren Hall. Robert Pignatello, John Jay College senior vice president and CEO, says, “This open air plaza will, for the first time, provide the college with an actual green space where students, faculty and staff can mingle, enjoy good conversation and build a better sense of community. With grass, trees and benches, this remarkable space will provide an inviting and truly unique outdoor experience.”

Probably the most unique aspect of this project is how the team has architecturally melded the new with century-old structures.

The addition is connected to Haaren Hall, creating a campus that occupies one full city block. This design also eventually allows for further growth on the site. The new building’s contemporary modern design — a marked contrast from the more classically designed Haaren Hall — is in keeping with the way the college has changed. The red aluminum fins on the new building help tie in the new with the old.

Another unusual aspect of the project is the large amount of space designed to encourage interaction and communication between the students and faculty. The social cascade, with its open-plan lounges and studying areas, acts as the central spine of the building and is anticipated to be the hub of social activity, while the rooftop commons provides students with an outdoor green space for congregating.

Looking to the future, John Jay’s Travis says that to achieve excellence in student success the college needs to create an environment in which students can be successful, not just academically, but in all aspects of their lives.

“To achieve excellence in strategic partnerships, we must continue to nurture our relationships with other entities in the pursuit of our shared goals. Our aspiration to excellence in institutional effectiveness reflects our understanding that continuous, systematic self-assessment and improvement must become part of our culture if we are to reach our full potential.”