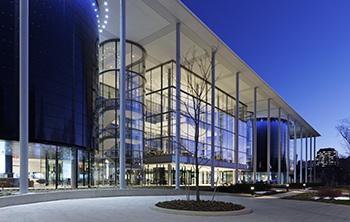 NEW HAVEN, Conn. — Yale University opened the new 230,000-square-foot Edward P. Evans Hall on Jan. 9 for the School of Management. Situated at the northern end of the Yale University campus, the building’s modern design features a stunning glass façade that makes it an architectural landmark for the university. The new hall reflects the School of Management’s new integrated curriculum for business school education, combining teaching facilities with inspiring social spaces.

Foster + Partners served as the design architect, while IBI Group ▪ Gruzen Samton was the architect of record. Both companies have locations in New York.

The facility design places Yale’s faculty departments in a single location, which offers a high level of transparency to the traditionally enclosed college courtyard. The green space is visible throughout the school, creating an inviting space for the campus community.
Foster + Partners designed the facility using feedback from the university’s faculty members. The design team even produced full-scale mock-ups to allow teaching staff to experience the lecture space, said said Nigel Dancey, senior partner with Foster + Partners.
The classrooms are contained within 16 double-height oval drums, which frame a central courtyard. The five-story building incorporates several social spaces, guided by the principle that casual interactions are just as important as classroom-based learning. This design encourages collaboration and promotes a sense of school spirit.
The social spaces — a coffee shop, media library and a large common room — are located on the ground level. The second floor houses classrooms connected by a wide internal circulation “cloister.” The glazed facade around the courtyard follows the curves of the blue classroom drums, creating bays where students can sit and gather. The third floor is pulled back from the facade to form a mezzanine, opening visual connections between the different levels.

The 16 classrooms were designed to support a variety of different learning styles, including team-based working lectures, group discussions and video conferencing. The facility features advanced technology such as simultaneous translation, filming, multimedia displays and enhanced acoustics.

Other highlights of the facility include the second floor semicircular Beinecke Room, which provides a flexible events space with an 80-person capacity. It is also connected to a large curving terrace featuring views that overlook the natural landscape to the east. Located below the Beinecke Room, there is a 350-seat auditorium for the university to host its high-profile lecture series. The auditorium continues the visual connection with the courtyard outside, as opposed to more traditional auditoriums that are closed off.

“Another important aspect of the project is the integration of works of art, which complement the architecture,” Dancey said. “These include murals by Sol LeWitt, which bring the circulation spaces to life in swirls of color, and a site-specific installation by the Swiss artist Adrian Schiess, whose 90 painted panels appear to magically change color as the viewer moves around them.”
This project is seeking LEED Gold certification. Chilled beams serve as a displacement system of ventilation and solar shading, which complement the building’s high-performance envelope that employs solar responsive shading that naturally reduces energy demand. Plus, slender columns hold the roof in a way that shades both the façade and wide entrance plaza below.

“Every decision as the design evolved was taken with carbon reduction and a holistic approach to environmental issues in mind,” Dancey said. “This was a natural way of ensuring a sustainable approach that would fit the unique needs of the project, rather than having a prescriptive environmental agenda drive the design.